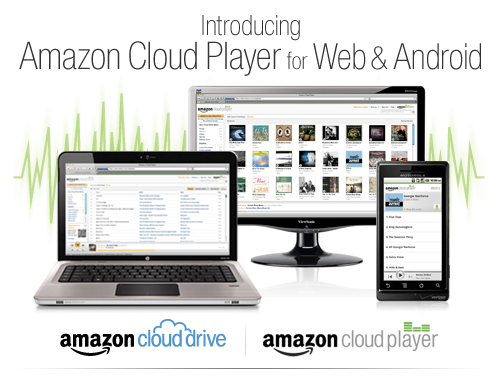 If there was any doubt that Amazon was eventually hoping to get into the Android tablet game, it should be dispelled by Amazon’s introduction today of Amazon Cloud Drive and two flavors of Amazon Cloud Player, one for web and one for Android. The former is a digital locker for the music people own; the latter two allow users to listen to that music anytime, anywhere, on Mac, PC, or Android devices. (It also works, albeit oddly, on iOS devices: One needs to download the MP3 in question from Amazon’s server, then listen to it with Safari’s player.)

If you already have an Amazon account, there’s little reason not to use the service, since the first 5 gigabytes of storage are free. This becomes 20 gigs if you download an album from Amazon; beyond that, storage for larger music collections starts at $20/year. As Peter Kafka points out, this is far from an earth-shaking service: It’s a handy way for people to listen to their music on multiple devices, but it’s not a MOG- or Spotify-killer. It’s interesting, however, to consider the service as a marriage between Amazon’s cloud and media businesses, as a beachhead into an eventual Android platform push, similar to Amazon’s Android app store, and to note that Amazon has gotten the jump on Apple and Google, who have been negotiating with the labels to set up similar music services forever.

How did Amazon do it? By ignoring the labels entirely. That’s right: In this contract-ridden world, Amazon simply consulted its lawyers and decided that it wasn’t breaking any laws by setting up this service. Unsurprisingly, some labels take issue with this.

At stake is whether uploading one’s own music to Amazon’s servers constitutes illegally sharing it with a third party.

One major music company, Sony Corp.’s Sony Music Entertainment, expressed dismay at Amazon’s plans, echoing concerns of others in the industry. “We are disappointed that the locker service that Amazon is proposing is unlicensed by Sony Music,” a spokeswoman said Tuesday evening.

“We don’t need a license to store music. The functionality is the same as an external hard drive,” according to Craig Pape, director of music at Amazon. But not everyone agrees. Sources tell Hypebot that Warner Music Group is particularly upset by Amazon’s unlicensed launch and considering how to react.

WMG, may however, find that other labels aren’t ready to join them in a fight with Amazon. “It’s about time someone did tis and we’re just glad its not Apple,” one label source shared privately. “It will push other negotiations forward.”

You know that the time is ripe for a sea change in digital music when some labels so dislike Apple’s dominance that they’re willing to overlook a major player brazenly not consulting them to get a new service out the door.