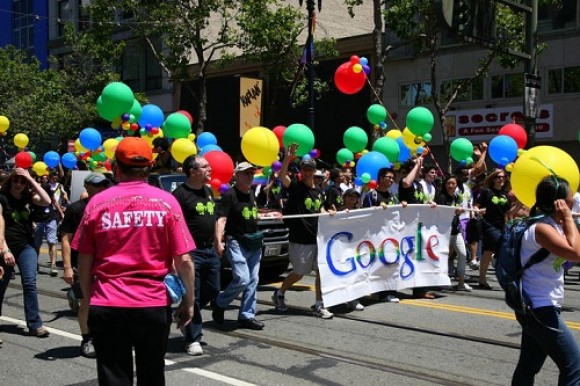 And you thought Oreos had influence. Google has launched a campaign they’ve called “Legalize Love,” in support of Google employees who identify as a part of the LGBTQ community. Considering that Google is a behemoth of companies that owns everything, and knows everything about everyone (that’s why its hair is so big, it’s full of secrets), the fact that they’ve stepped forward in such a way to champion LGBTQ issues could have shouldn’t be underestimated.

It’s important to note that Google has stepped up on issues like this before, and back in 2008 publicly came out against Proposition 8’s ban on same-sex marriage in California. As Google executive Mark Palmer-Edgecumbe said upon announcing the campaign yesterday, “being a global center and a world leader means you have to treat all people the same, irrespective of their sexual orientation.”

The campaign, which was announced Saturday, July 7th, at the Global LGBT Workplace Summit, will focus for now on countries like Poland (which as of yet has no legal recognition of same-sex couples) and Singapore. In a written statement, Google said this of the campaign:

“‘Legalize Love’ is a campaign to promote safer conditions for gay and lesbian people inside and outside the office in countries with anti-gay laws on the books.”

The campaign will mostly be based in countries outside of the US, and while many are reporting it as Google’s push for the worldwide legalization of same-sex marriage, a spokesperson told CNN that was inaccurate, and that the campaign focuses on human rights and employment discrimination.

As Palmer-Edgecumbe said in his announcement, “We want our employees who are gay or lesbian or transgender to have the same experience outside the office as they do in the office. It is obviously a very ambitious piece of work.”