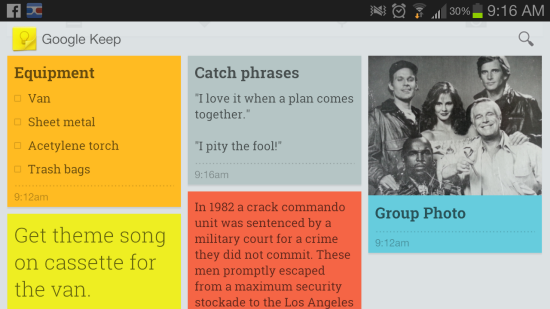 Google is continuing to shake up their product line. First, they announced the untimely death of Google Reader. Then it came out they’ll be smashing all their chat products together into a single tower of an app known as Babble. Now they’ve jumped into the note-taking pool to make waves for competitors like Evernote with Google Keep. I installed Keep on my Galaxy S3 last night, and I’m already in love.

I mention Evernote specifically because it’s an app I’ve tried to use a number of times since it was introduced, and I never got into it. There are a lot of people who love it, but for me it seemed to get things too organized, and always felt like a lot of work to manage. I’m not knocking Evernote, and I doubt any heavy Evernote users will jump ship for Keep, but I’ve already stopped using the default S Memo app on my device, and I’m not looking back. Google Keep is much simpler than either Evernote or S Memo, and that’s the real appeal for me.

After installing Keep, you link it with your Google account, and that’s it. You can quickly jot down text, make a to-do style list, record audio which is then transcribed for you — albeit kind of poorly — or take a photo. Color-coding is easy, but you only have eight color options. Since Keep doesn’t appear to have a folders option, color-coding is probably the best bet to try to keep a large number of notes organized.

There are Android widgets to make using Keep even faster, and everything you write in Keep gets synced automatically to the cloud and can be recovered at drive.google.com/keep.

Google released a video showing some potential uses for Keep:

We’re not all cartoons in bands, but I think everyone has things they need to write down, and of all the note-taking apps I’ve used on any smartphone, Keep is the one I’ve enjoyed using the most. While I do love its simplicity, a few more features wouldn’t hurt. Folders would certainly be nice, and I wouldn’t mind an option to draw a note like I can do in S Memo or Evernote’s “Skitch” app.

Keep is available right now in the Google Play store for devices running Android 4.0.3 and up. When I searched for it in the Google Play app on my Galaxy S3 it didn’t come up, but when I found it online it gave me the option to send it to my device, which is not a feature I realized Android or the Play store had. You learn something every day.