Don't read the comments, my butt.

In a stunning (but sadly not surprising) display of immature grossness, the nastier denizens of the Internet reared their ugly, sexist heads in the live comments section of the Google I/O livestream.

Google’s major conference, Google I/O, was livestreamed to the Internet on YouTube this past week. WIRED author Molly McHugh noted an interesting change in the comments when men left the stage and when women went on. When men were talking, the snarky comments centered around the usual Google bashing and chatter about how their product sucks. They were mostly being attacked for their ideas.

However when women were talking, the comments centered around their bodies, their looks, and a good amount even revolved around rape and assault fantasies. The women were being attacked for, well… being women. Ugh.

In the span of a single two-hour presentation, the YouTube comments section perfectly showed the kinds of shit that women have to put up with while working in the tech industry. Sure, it’s a comments section, and there’s the old rule of “don’t read the comments,” but to be completely honest, that rule is kind of dumb. Turning a blind eye to this incredibly disgusting behavior is exactly why it continues to fester and propagate. 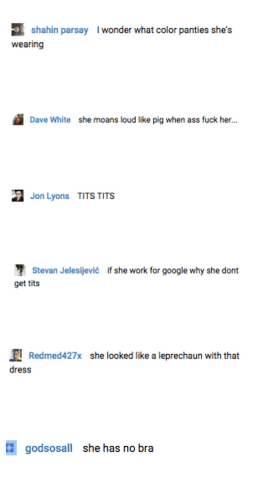 This livestream is supposed to bring hype, information, even excitement about tech into the homes of anybody on the Internet. It’s just too incredibly bad that all of those things have to come with a side order of gross comments.

Stay classy, Internet. But seriously? You can do better. Much better.