Google’s Artificial Brain Watches More Cat Videos Than You Do 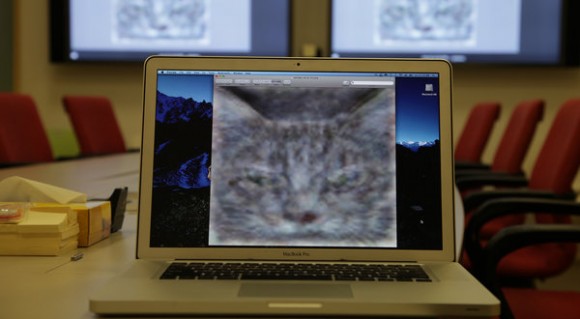 Google’s X Laboratory, a secret facility that’s been used to research novel technologies such as self-driving cars and augmented reality glasses, has been working on creating an artificial human brain using 16,000 computer processors connected to simulate the brain’s neural networks. The “brain” was tasked with scanning thumbnails from Youtube, after which is did the only logical thing a brain could do when presented with a wealth of human-made viral videos: identify all of the ones with cats in them.

This research endeavors to explore how the decreasing cost of computing, and the ability to network thousands of processors together, can advance machine vision, speech recognition, translation, and perception, and learning systems. Not only did the neural network teach itself to recognize cats, it also doubled its accuracy in recognizing objects in a list of 20,000 distinct items, performing better than any effort before it. According to the New York Times, this is a pretty huge deal:

“We never told it during the training, ‘This is a cat,’ ” said Dr. Dean, who originally helped Google design the software that lets it easily break programs into many tasks that can be computed simultaneously. “It basically invented the concept of a cat. We probably have other ones that are side views of cats.”

The Google brain assembled a dreamlike digital image of a cat by employing a hierarchy of memory locations to successively cull out general features after being exposed to millions of images. The scientists said, however, that it appeared they had developed a cybernetic cousin to what takes place in the brain’s visual cortex.

In other words, Google researches managed to simulate one of the bigger mysteries of the human brain: learning. The findings seem to line up with current theories that suggest that the human brain learns when “individual neurons are trained inside the brain to detect significant objects.” As Gary Bradski, a neuroscientist at Industrial Perception, says: “you learn to identify a friend through repetition.” Or, you learn to identify cats by watching the millions of cat videos on Youtube.

Unfortunately, it doesn’t seem like we’re much closer to creating an entirely accurate artificial brain. While Andrew Y. Ng, the project leader, notes that “a loose and frankly awful analogy is that our numerical parameters correspond to synapses,” the research team is quick to point out that “our network is still tiny compared to the human visual cortex, which is a million times larger in terms of the number of neurons and synapses.” Even though these scientists have barely scratched the surface of the capacity of the human brain, Google’s current research will be put to use making improvements to image search, speech recognition and machine language translation.

(via Gizmodo and The New York Times.)