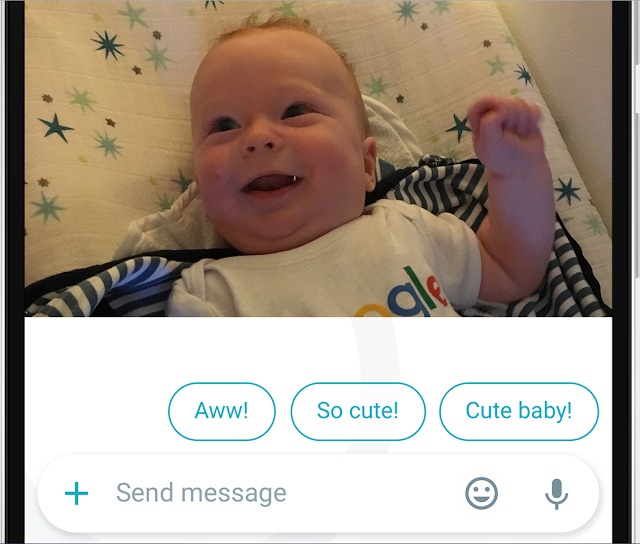 The Internet allows us to communicate with people a lot more efficiently and effectively, but it also allows us—compels us, even—to communicate with way more people, so the time savings can be kind of a wash. Now, with Google’s new Allo messaging app, all that annoying human interaction can be automated for you to help with perfunctory replies to all the pictures people send you.

Google I/O 2016 kicked off yesterday, and they gave a big Allo demonstration, including how the app integrates Google Assistant. Assistant can do a lot of things—even allow you to get Google search results right in chat or play chat games—but one of its selling points is a rather creepy ability to identify the contents of photos and invent some feelings for you to have. According to a blog post on the subject, it does this with a combination of several Google technologies:

We utilize Google’s image recognition technology, developed by our Machine Perception team, to associate images with semantic entities — people, animals, cars, etc. We then apply a machine learned model that maps those recognized entities to actual natural language responses. Our system produces replies for thousands of entity types that are drawn from a taxonomy that is a subset of Google’s Knowledge Graph and may be at different granularity levels. For example, when you receive a photo of a dog, the system may detect that the dog is actually a labrador and suggest “Love that lab!”. Or given a photo of a pasta dish, it may detect the type of pasta (“Yum linguine!”) and even the cuisine (“I love Italian food!”).

Wow. The lengths Google’s staff will go to not to have to actually interact with anyone are intense. Really though, while the machine generated emotions (most of them seemingly ending in exclamation points for maximum emoting) may seem kind of like something out of an emotionless dystopia, I’m not sure they’re that much more perfunctory than typing out a similar response that you’re basically expected to give when someone sends you a photo. Maybe the really depressing thing about them is the demonstration of how empty some of our social gestures really are, since they can be easily duplicated even by today’s relatively rudimentary artificial intelligence.