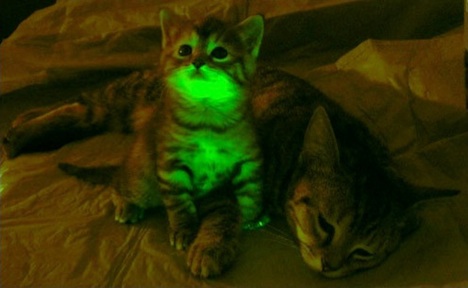 Okay, so, there’s a glowing kitten. Right there. Why, you might ask, is that kitten glowing and what does it have to do with finding a cure for AIDS? Well, I’ll tell you! Before that kitten became a kitten zygote, the egg that was eventually fertilized was injected with two things: a rhesus macaque gene that blocks cell infection by the feline version of HIV and a jellyfish gene that causes the glowing — for tracking purposes. Science is adorable and freakish, and possibly life-saving! ETA: Why the glow-worm effect?

The scientists running this weird experiment — which was recently published in Nature Methods — are hoping that it will provide insight into possible ways to block cell infection by the human immunodeficiency virus, and are hoping that the cat-o-lanterns will show possible signs that the rhesus macaque gene is preventing the feline virus from attacking the cat’s T-cells. This occurs because of a restriction factor in the gene called TRIMCyp. Once the kittens are born from the eggs that have had the genes injected, the defenses develop throughout the kittens’ entire bodies. This experiment marks the first time this method — gamete-targeted lentiviral transgenesis — has been attempted in a carnivore.

While the exact role of the “tracking” isn’t outlined (and the article on Nature Methods is restricted) as far as its connection to the other gene, perhaps if the cells are not being blocked by the TRIMCyp, the FIV is not only being allowed into the cells, but also causes the glowing to stop. In other words, if the TRIMCyp is defending against FIV attacks on a kitten’s cells, the kitten will continue to glow. If it is ineffective against FIV, then the kitten will cease to glow.

ETA: Thanks to one of our readers, Dirk, we now have a better explanation for the role of the jellyfish gene that makes the kittens glow. The reason for the glowing is actually to identify the cats that were successfully injected with the TRIMCyp gene to make sure that they have it in the first place. (So if one of the kittens isn’t glowing, they don’t have to run the tests on it.) Dirk provided this excerpt from Science:

“Because cells are readily infected by lentiviruses, the researchers made a lentivirus containing the TRIMCyp gene as well as a gene that encodes for a fluorescent protein. The latter allowed them to easily visualize which cells contained the new genetic material — cats with the gene glow green (see picture). After allowing the virus to infect the eggs, the team fertilized them with normal cat sperm and injected them into the fallopian tubes of 22 female cats. Each cat received 30 to 50 eggs. Five cats became pregnant, with 11 embryos between them, the team reports online today in Nature Methods. Ten of the embryos contained the new genes, and five gave rise to kittens, three of which are still alive.”

Dirk also adds that the cats actually don’t glow in the dark, that they only do that under UV lighting. Thanks for the clarification, Dirk!

Scientists are hoping that not only will they be able to parlay the results of this (if they prove successful) into treating HIV/AIDS in humans, but also help save 36 species of wild cat species that are currently endangered because of FIV, which kills millions of cats every year.