Glitch Goes Live, You Should Check It Out | The Mary Sue

Glitch Goes Live, You Should Check It Out 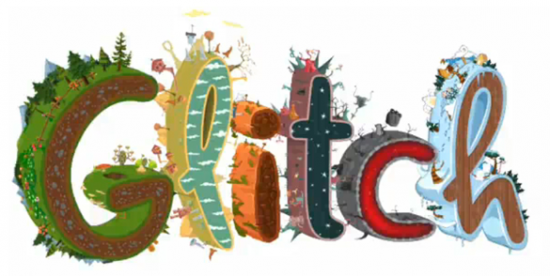 Glitch went live today at 1pm EST, and having played the beta, I’m going to say that you should check it out. What is Glitch you ask? Well, if you’re asking that, you must have missed out on this lovely little trailer (which you should watch immediately and then walk around singing for the rest of the day) so I’ll give you the skinny as best I can. Glitch is a lot of things.

First of all, Glitch is a browser-centric, Flash-based, social MMORPG developed by Tiny Speck (aka those guys from Flickr) and Keita Takahashi (aka that dude from Katamari Damacy). Weird combination, I know. Glitch has a strong social gaming influence. You can taste the FarmVille if you’re trying to, but there’s also considerably more depth here. Learning skills involves the standard “click the learn button, wait X hours” behavior common to browser-based games, but there is also a strong avatar-based world. In the world, you run around doing bizarre things like nibbling piggies (both of those words are specific, technical terms; I’m not trying to be cute) milking butterflies, playing music for crabs, and squeezing chickens as well as more conventional things like making food, earning money, mining minerals, and saving up for a house.

Those of you entirely unfamiliar with the game probably hitched up at the “nibbling piggies” part and had to go back for a second pass. Yeah. This game has a very distinct, and in my opinion, successful brand of humor. Not only that, but the humor is 100% integral to the experience. The premise is that the world is imagined collectively by 11 “giants” with names like Humbaba and Spriggan; think cute versions of Lovecraftian elder gods. Now, that isn’t a spoiler. Everyone is acutely aware of this fact and the many characters in the game will discuss it with you. When I say “the many characters” what I really mean is that everything talks. Rocks, trees, plants, piggies, and chickens will all talk to you and their dialogue is delightfully conversational. Sometimes you just want to click through the dialogue boxes to finish mining the rock that’s trying to talk to you, but they are worth reading. 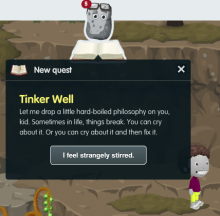 While the tone and the writing of the game are its greatest strengths, the gameplay is solid too. The interface is terrific at accepting input from mouse or keyboard so you can run around the level like a stage in a platforming game, collecting exp bubbles if you want to, or just click the end of the zone to automatically walk there while you go make a sandwich or something. Your time in world is largely comprised of completing quests that come with newly learned skills, at least at the beginning. For instance, you learn to nibble piggies for meat and you get a quest along the lines of “Yo, go nibble 7 piggies, man.” You also spend time collecting and eating food to maintain energy, drinking drinks to maintain mood and collecting money, “currants,” to spend on tools, food, drinks, or even a house.

Of course, like every other MMO released since a few months ago, Glitch is a free-to-play game with some subscription options. While currants, the in-game currency, (get it?! Glitch loves its puns) are needed to buy things like houses and tools, subscription options earn you “credits” which can be spent on clothes, hair, and other visual customizations, as well as things like teleportation tokens. The separation should allow free players to still get the full experience, even if it means not looking as cool. 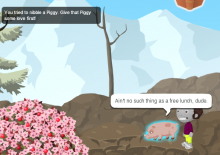 All in all, Glitch has been a good experience for me so far, and I plan to continue playing (as a free member) when it goes live. The bulk of the action is 5-minutes-from-now, “I’ll do this so I can do this other thing” questing, but that’s pretty standard for browser-based MMORPGs. The unique tone and writing Glitch brings to the table is more than enough to suck you into the bizarre little universe they’ve got going. Since the beta has been wiped (a couple of times, I think) I’m interested to see how the world will be when there are a large number of players and a large number of players who are highly leveled.

If Glitch sounds at all interesting to you based on this article, you should really go grab an account as soon as you can. There is a lot to this game, a lot, and considering I can’t talk about everything, I feel the need to urge everyone to try it out. It’s a pretty stylized game, so it may not be your cup of tea, but if it is, man, you’re going to really enjoy that cup of tea.