Hear From The GLAAD Media Award Winners | The Mary Sue 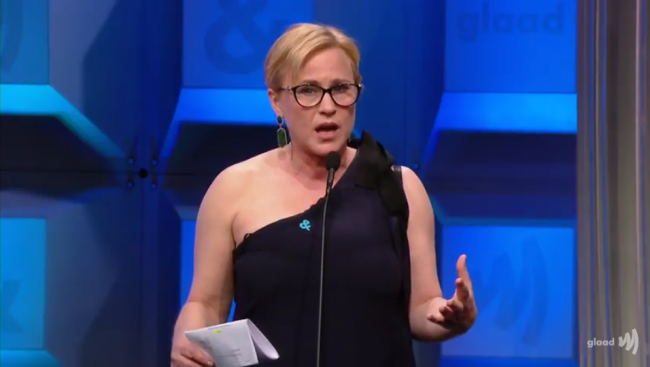 The GLAAD Media Awards are a complicated affair, with one ceremony taking place in Los Angeles this weekend and a second ceremony taking place on the east coast in New York on May 6. However, last night we found out who the winners are in a number of big categories, including film, comic books, and television.

In addition to the fun of receiving awards, there were a number of moving speeches.

In her acceptance speech for the Vanguard Award, Patricia Arquette honored her sister, Alexis, an actress and transgender activist who died from complications due to HIV/AIDS in 2016. Arquette acknowledged that, as an ally, she will never face what her sister did. “Whatever mark I have made in this life, in activism, will always pale in the light of Alexis’s bravery,” she said, “and in the light of the bravery of every trans kid growing up in America.”

“[Alexis] wanted to help move the world forward to a time in the future where every trans kid could live up to their full potential,” Arquette said. “Where it wouldn’t be uncommon in your everyday life to have a doctor, a nurse, a cop, a real estate agent or a public official who is a transgender person…But that is not what is happening.” Arquette then spoke to the Trump administration’s hostility toward LGBTQ people and Texas’s potential SB6 law, as well as the poverty and appalling murder rates that transgender women of color face. She called on those in the audience to work on these issues.

In their acceptance speech, the Shadowhunters actors celebrated the uniqueness of their show’s LGBTQ characters with a smile. Harry Shum, Jr., who plays Magnus Bane, said, “So, on the show, I play an openly, proud bisexual warlock who’s a person of color that’s in a relationship with a recently out, gay Shadowhunter who hunts demons for a living…I mean, I don’t think that combination has ever existed on television before. And that just shows the progress of telling these unique stories, and the importance of what GLAAD has been doing and continue[s] doing.”

In their acceptance speech, the Transparent team all took a turn at the mic to call for increased LGBTQ advocacy across the aisle and honor the strides made by LGBTQ activists in the past.

“I remind us all that we live on a planet that spins on an axis of history and hope,” said Alexandra Billings, “and I tell you this from my heart of being a 55-year-old transgender woman of color living with AIDS for the last 30 years… The younger generation is listening to us. They see these images. So we have to guide them because without their voices and without their stories, we have no more humanity. So let’s go outside, take who we are and who we hope to be and give it to the people.”

Unfortunately, the Transparent team’s speech is not yet on GLAAD’s YouTube channel, but a number of the other speeches are uploaded if you’d like to watch.

(Via The Hollywood Reporter; image via screengrab from GLAAD’s YouTube channel)