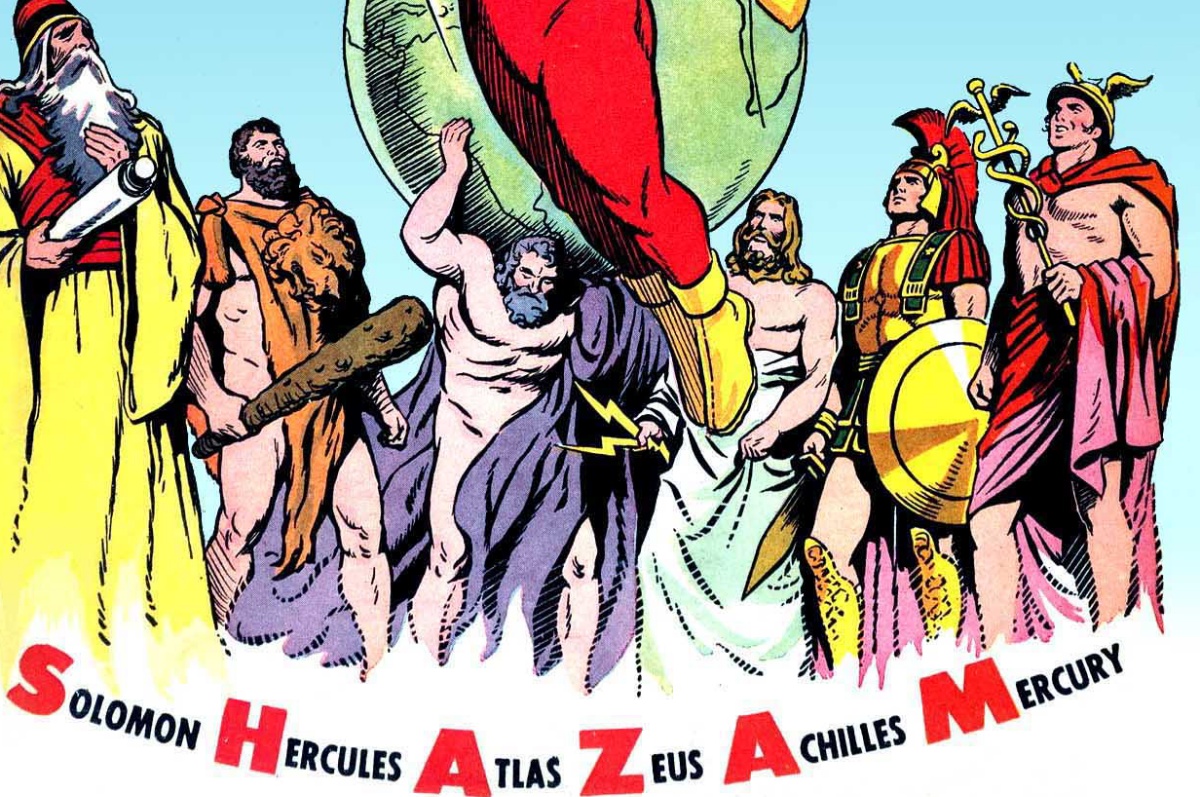 For those not in the know about Shazam, it’s not only the name of the Wizard who gives young Billy Batson his powers, but also an acronym of six “immortal elders”: Solomon, Hercules, Atlas, Zeus, Achilles, and Mercury. Now, as a mythology nut, this hodgepodge of Greek/Roman deities (+Solomon, because that’s probably the first smart person they think of) just seems so dated and dry to me, so I thought, if we were crafting a new SHAZAM for Captain Marvel, who would be the immortal “elders” I’d give him?

Samson is one of the last judges in the Book of Judges in the Hebrew Bible. Known for his superhuman strength, he was able to kill a lion with his bare hands and killed an entire army with only the jawbone of a donkey. Must have been a big ass.

He shares a lot of similarities to the Greek Heracles. Samson was betrayed by his lover, Delilah, who ordered a servant to cut his hair while he was sleeping. Samson’s powers came from his vow with God that he would never cut his hair. Considering Samson did not choose to get his hair cut, it’s a little petty that OT God decided to really take away his powers, but that’s Jehovah for you.

Samson does eventually get his strength returned to defeat his enemies after being enslaved.

Horus is one of the most important gods in Egyptian mythology. The son of Iris and Osiris who avenged the death of his father, Horus was chosen to be the ruler of the living, and his father would rule the dead. The Ancient Egyptians believed that the pharaohs were the “living Horus” and gained their divinity through him.

Horus has taken many forms: the avenger of wrongs, defender of order, uniter of the two lands, and a god of war. Horus represents a divine power closely connected to humanity, much like Captain Marvel himself.

One of the most important characters of West African and Caribbean folklore, Anansi the Spider, is both a trickster and considered to be the spirit of all knowledge of stories. Anasai has a lot of meaning for people who are descended from slavery because his stories were carried on in oral traditions, so that even after being kidnapped, his legacy still lived on. More than just a collector of wisdom, Anansi is an inventor, with ingenuity and an ability to make more seemingly powerful enemies—the perfect kind of wisdom for a superhero who is also a kid inside.

Zephyrus is the Greek god of the west wind. The gentlest of the winds, Zephyrus is known as the fructifying wind, the messenger of spring. He was chosen because his name begins with a Z, and it was really hard to find a relevant diety/folklore figure with a Z, so here we are.

Initially, I wanted to put maybe Athena in here, or my personal favorite, Artemis, but then I thought I’d rather trade one Greek warrior for another and rather than go with Hippolyte, who most know, I decided to pick Atalanta. In Greek mythology, Atalanta was one of the many babies that were meant to die from exposure but was spared by divine intervention for a higher purpose.

She was given milk from a she-bear and cared for until hunters found and raised her. Atalanta grew to be a fierce hunter, who wanted to never marry. She was faster than any man, helped kill the Calydonian Boar, and was the only female hero on the Argo during the quest for the Golden Fleece. Being the only woman in a male-dominated ancient Greek world? That requires a hellish amount of stamina.

I’d hope you have all seen Moana by now, but in case you haven’t, Māui is a cultural hero from across Polynesian folklore. A human man, given immortality by the gods after being abandoned, Māui used all of his divinely given gifts to try and help humanity. As the song “You’re Welcome” explained, he is accredited with a lot of phenomenon in folklore, including stealing fire from the gods to bring to humans, creating the first dog, slowing down the sun so that there would be enough daylight for humans to enjoy the day, and being crushed by the obsidian teeth in the goddess Hine-nui-te-pō’s vagina for trying to steal immortality for humans—a demigod worthy of inspiring Earth’s Mightiest Man.

Who would be the “immortal elders” you’d call upon for strength in mythology?