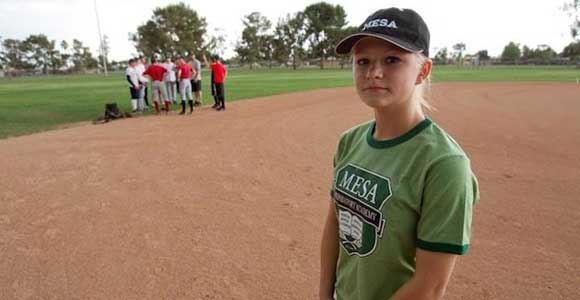 Fifteen-year-old Paige Sultzbach didn’t get a chance to play in her school’s baseball championship because the opposing team of boys refused to play her, forfeiting the match instead. Not cool, dudes.

“Our Lady of Sorrows bowed out of Thursday night’s game against Mesa Preparatory Academy in the Arizona Charter Athletic Association championship,” writes ESPN. “Paige, who plays second base at Mesa Prep, had to sit out two previous games against Our Lady of Sorrows out of respect for its beliefs. But having her miss the championship was not an option for Mesa Prep.”

ESPN writes, “Both schools play in the seven-team 1A division of the ACAA. Our Lady of Sorrows won the Western Division and Mesa Prep won the Eastern Division with an undefeated season.” So what gives? Out Lady of Sorrows declined to speak with press but did issue a statement which said they have a policy prohibiting co-ed sports. I can understand a Catholic school having that policy for their own teams but not enforcing it on other schools when it comes time to play competitively.

According to the report, “The statement also said the school teaches boys respect by not placing girls in athletic competition, where ‘proper boundaries can only be respected with difficulty.’ Our Lady of Sorrows is run by the U.S. branch of the Society of Saint Pius X. The group represents conservative, traditional priests who broke from the Catholic Church in the 1980s.”

I respect religious beliefs but if your boys don’t know the difference between playing sports and trying to hook up, I think you’ve got to try different teaching methods. It’s almost sounds like telling women to cover up so men don’t grope them. No, just don’t grope them. Same thing here – just play sports.

“This is not a contact sport, it shouldn’t be an issue,” said Paige’s mom Pamela Sultzbach. “It wasn’t that they were afraid they were going to hurt or injure her, it’s that (they believe) a girl’s place is not on a field.”

Why was Sultzbach on the boys’ team at Mesa Prep anyway? “In junior high, Paige played softball and volleyball,” writes ESPN. “Because Mesa Prep does not have a girls softball team, she tried out for the boys baseball team and received support from her coach and her fellow teammates.”

“The very idea that such stereotypes are so strong, they’d actually forfeit a game simply because a girl was on the field. That’s ridiculous,” said Lisa Maatz, director of public policy at the American Association of University Women. “Does she have cooties?”

Cooties, indeed. It certainly sounds like the decision makers at the school are stuck in high school themselves. And as Nancy Hogshead-Makar, senior director of advocacy for the Women’s Sports Foundation said, this is a bad lesson going forward in life. “In real life, these boys are going to be competing against the girls for jobs, for positions in graduate programs or in trade schools. In every other area of their life, they are going to be competing side by side.”