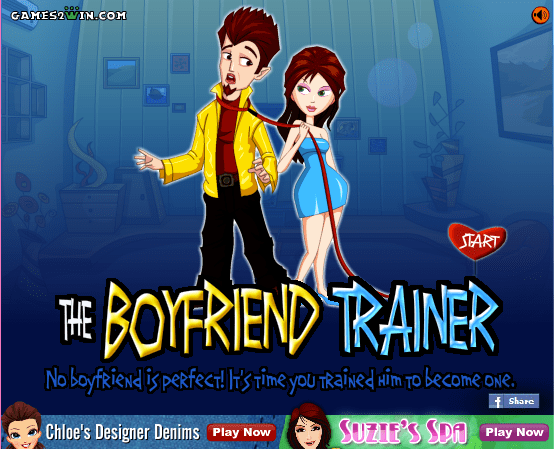 Okay, everyone, let’s get something straight: slapping a fellow human in a video game in order to control them in some way is not cool. Men slapping women? Not cool. Women slapping men? Also not cool. It’s not cute, it’s not funny. And yet, it still shows up. Again and again, this time in a little game called The Boyfriend Trainer. A game geared towards tweens.

The Frisky recently visited a low-budget gaming site for tween girls called Top Girls Dress Up, which features other games centered around Bratz dolls, makeovers, and parties. And to everyone’s chagrin, there was a game called The Boyfriend Trainer with the tagline: “No boyfriend is perfect! It’s time you trained him to become one.”

“One” what, exactly …? Oh, a perfect boyfriend. No copy editors, huh? Okay then. (I hereby admit to my own typos.)

Anyway, grammar grievances aside, the object of the game is to physically abuse a boyfriend until he becomes completely obedient. For example, when he eyes another girl while on a date, he must be slapped. Numerous times. The protagonist is also issued a whip, by the way. Because if there’s anything we want the future generation of women to become, it’s domestic abusers. (And/or dominatrices, but that’s a whole other story.) Context aside, no one deserves to get slapped. Slapping is bad. Why in the world would anyone want to encourage this in tween girls?

But mostly, why are we being asked to slap a bad boyfriend into submission? If a dude checks out another girl on a date you dump him.

If the player doesn’t slap the bad boyfriend enough times, you lose the round when he “escapes.”

Good! Good riddance! Let that loser go! Being dumped by a scumbag means you are no longer dating a scumbag, and that’s a good thing. Better yet, let’s just stay the hell away from this game.

Uccchhh, this is just lame. And gross. And annoying. On to Portal 2.