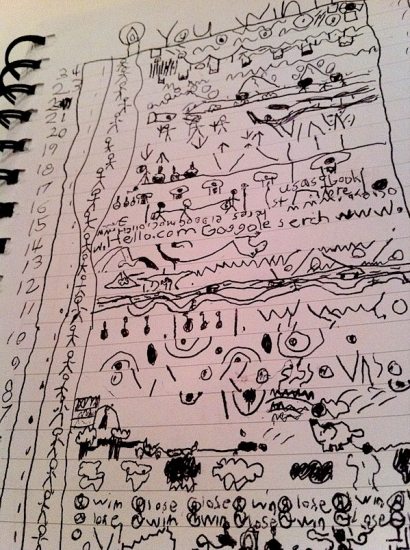 Back when we were kids in the glory days of the original NES, my brother used to create “paper games,” hand-drawn boards with cut-out good guys and bad guys. Mark Frauenfelder over at Boing Boing has a very creative daughter who created her own hand-drawn “computer game” and was kind enough to give us an explanation. And she is sure to make my brother — now a computer engineer — feel like such a slouch for not pursuing game design!

You can listen to the game maker’s own walkthrough here, and while it’s not the most linear, it sure is detailed. For example, in the “jungle level,” it’s all about getting from Point A to Point B. After getting on a bus, you then board a “little animal,” then an elephant eats you and later “poops you out.”

Level 4 is a sort of “coin-flip” level, in which you need to flip “win” — as opposed to “lose” — across the level before advancing. Level 15 involves throwing an object “way over the police and a bad guy, or else they might do something to you.” Her favorite level is Level 9, the “eyeball level,” in which you have to avoid letting an eyeball catch you in its glance by escaping through portals.

There are portals, roses, candles (or torches), and it seems like a pretty exciting game! Here’s to hoping she keeps up the good work and becomes an awesome video game designer when she grows up!

To listen to the entire explanation (about 6:37), click here.