Gina Carano Kicked A Lot of Butts For Haywire 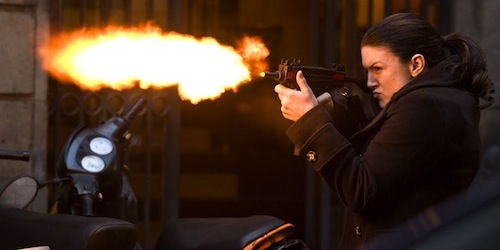 Despite favorable reviews, the homage to 70’s spy films peppered with more modern, brutal fight sequences Haywire hasn’t exactly been raking in the box office funds. I admit myself to being skeptical of it at first: the fact that the trailers reveal no female characters other than Gina Carano‘s Mallory made it seem a bit “we stuck a lady in!” gimmicky instead of an general on putting women in well-rounded roles (whether the hero or not) in action movies. Now, I’m usually in favor of such kinds of gimmickry when it comes from the right motivation, and director Steven Soderbergh maintains that it does. His whole motivation for Haywire was the question “Why are we only making starring female action heroes if Angelina Jolie is involved?”

When Soderbergh got MMA cage fighter and American Gladiator Gina Carano’s cooperation and the movie greenlit, co-star Channing Tatum says that was a good part of the appeal to him:

I knew for the first time there was going to be a real fighter, male or female, in an action movie. Maybe in some Japanese or Chinese movies you may have some action stars that could actually step in the ring and could hold their own, but in America she’s probably the first one.

Carano’s story of getting into the character is another interesting one. For one thing, she’d never acted before. For another, she wasn’t even really familiar with the action genre, despite her profession.

I grew up on ‘Anne of Green Gables’ and  ‘Pride and Prejudice.’ I didn’treally watch action films. I know that sounds really weird coming from a tom boy, but I think I balanced myself out that way by watching those films. So, I didn’t really have somebody I was looking at to mimic, and I didn’t have somebody to mimic in fighting either.

But between the skills she had from MMA and hours of “boot camp, with guns and getting yelled at, and getting stalked and stalking other people,” Carano was well equipped to beat up quite a few of her co-stars. And what co-stars! Ewan McGregor, Michael Douglass, Antonio Banderas, Michael Fassbender, and Channing Tatum!

From improvising smashing a vase into Michael Fassbender’s face on her first day, much to the delight of Fassbender and Soderbergh (Carano was worried it would get her fired), to being on the receiving end of a punch to the head from Ewan McGregor… and immediately asking him if he was okay, well, I might be repeating myself, but it seems like she kicked a lot of butts. McGregor says he always felt in good hands with her as a fight scene partner, even if he had injured his own hand… by punching her.

Screen Rant’s got more in depth anecdotes about the movie’s shoot here.