On the Unspoken Option in Gilmore Girls: A Year in the Life | The Mary Sue

On the Unspoken, Stigmatized Option in Gilmore Girls: A Year in the Life 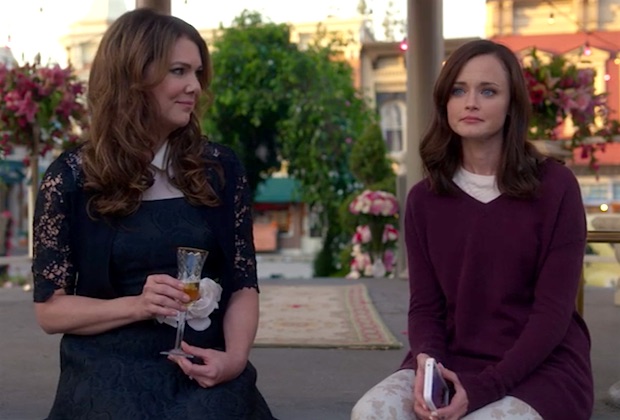 Fans have been both satisfied and disappointed with Gilmore Girls: A Year in the Life, but something I think we can all agree on is that the revival left us with a bunch of unanswered questions. Creator Amy Sherman-Palladino and executive producer Daniel Palladino have answered a few, but are they satisfactory? Huge spoilers if you haven’t seen Gilmore Girls: A Year in the Life.

First, apparently Rory could afford all those flights because she was scrappy with her points. Ok, sure. The higher stakes questions, however, are about those final four words which reveal that Rory Gilmore is pregnant. As the screen cuts to black, we don’t know who the father is or what Rory plans to do about her pregnancy.

In an interview with Buzzfeed, Sherman-Palladino says that viewers shouldn’t completely write off the possibility that Rory would terminate her pregnancy:

There’s nothing harder in the world than being a parent. And if you are not equipped mentally, financially, emotionally, to take that on, you can’t do it because the consequences are ridiculous.

The abortion issue is so weird, you know, because it’s so testy with the world, especially the KKK world that we now live in. But I think that somebody as smart as Rory is going to take a step back and look at all the angles, and then make her decision, because it’s too important a job to make the wrong decision when it comes to kids.

The two added that they currently don’t have plans to continue the show and that an open ending was intentional since “your life should not have a bow on it at 32.” Their justification for ending the show at this point is one I can respect. While we don’t have a happily-ever-after there’s something both disappointing and comforting to know that Rory is still struggling.

At the same time, it feels unfortunate that we don’t see Rory going through this consideration, aligning Gilmore Girls close to the “shmashmortion” genre—the trope of women dealing with unwanted pregnancies and carrying it to term with the word abortion never even being uttered or brought up. When shows like Scandal, Crazy Ex-Girlfriend, and more are taking brave steps to de-stigmatize a decision 3 in 10 women will make by the time they’re 45, it’s a little bit unfortunate that a show as women-centric as Gilmore Girls addresses this topic off-screen. While it is no doubt a “testy” issue, it’s an important one—now more than ever.

Of course, I wanted to watch Sherman-Palladino tell the ending she always envisioned. She says that they are “very, very proud of these four episodes” and the series felt like an appropriate send-off. It’s just hard not to imagine what the impact of such a scene might’ve been for viewers who grew up with these characters and to see that as a missed opportunity—even a conversation that considers the possibility would’ve been powerful.

What do you think about the way Gilmore Girls: A Year in the Life handled Rory’s pregnancy?

(via Vulture, image via Netflix)