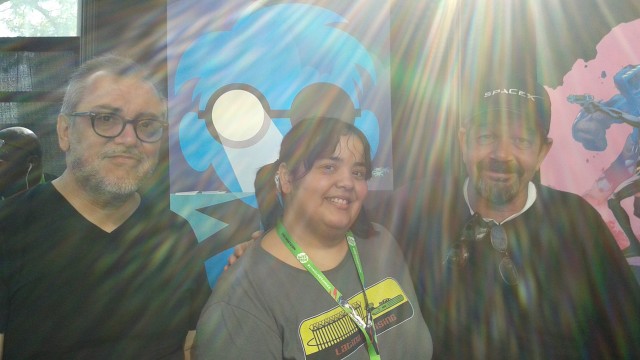 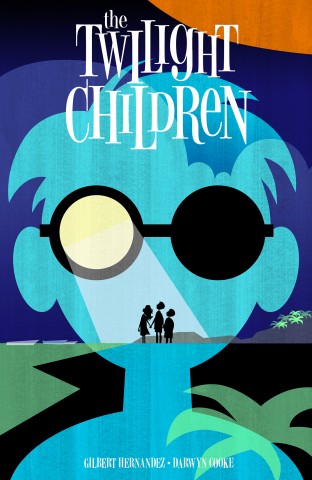 When a white orb washes up on the shore of a remote Latin American village, a group of children naturally poke at the strange object to see what it is. The orb explodes, leaving the children completely blind. And when a beautiful young woman who may be an alien is found wandering the seafront, she’s taken in by the townspeople, but soon becomes a person of interest to a quirky pair of undercover CIA agents, and the target of affection for a young scientist. Can they come together to prevent an all-out alien invasion and save the souls in this sleepy, seaside town?

Hernandez and Cooke sat down with me at this year’s New York Comic Con for an exclusive interview for TMS to discuss their collaboration and what makes The Twilight Children so special.

Teresa Jusino (TMS): Tell us a little about the origin of The Twilight Children and how it came to be.

Gilbert Hernandez: Our editor, Shelley Bond, had an idea of putting cartoonists together who hadn’t worked together before. So, she asked Darwyn whom he’d like to work with…

Darwyn Cooke: And I love this guy’s work, I’ve been a fan for many years. What he does is so very different than what I do, and I thought Wow, this would be a great challenge and a chance to work with somebody I really admire. So, apparently he said OK, and here we are.

TMS: That’s awesome. It’s great when creators are fans of each other. It often leads to really cool work!

Cooke: It does help. It takes that competitive, ego thing out of it.

Hernandez: And then Shelley called me and said, How would you like to work with Darwyn Cooke? And I opened up my wallet, and a moth flew out, and I said, Okay! [laughs] But no really, right away – I mean, I’ve worked with other artists before, and I was like, Well…. – but then she said Darwyn Cooke, and I said Yeah! Of course. He can do this. It was as simple as that. And I thought, The kind of story I do, he should be able to breeze through it. And he did, really.

Cooke: You know, on Twitter last week – and I’m not on Twitter, but my wife is – some wag said, Finally, Darwyn Cooke is gonna do a comic book that isn’t about how great white people are!

Hernandez: To be fair, when I saw the first issue, and everyone was brown, I was surprised. I didn’t even picture that.

Hernandez: Yeah, I was expecting everyone to have lighter skin.

Cooke: Well, the very first thing in the first script says: Latin fishing village, a variety of brown-skinned people milling about the town!

TMS: What are the plans for this? Is this an ongoing? A limited series?

Hernandez: Right now, the first four issues are going to be collected into a graphic novel. Depending on the buckets of money they pour on our heads – especially if they made a TV show…that would be pretty great.

Cooke: Yeah, who knows? Revenge of the Twilight Children.

Hernandez: There’s no more to the story. It ends beautifully for this story. But an offshoot of it might work. But as it is, it’s a nice story that comes together. If we did, it’d be a small portion of it that’s then taken somewhere else.

TMS: What does removing a story from a US-centric location, or even a Metropolis or a Gotham City…what does that contribute to storytelling?

Cooke: Well, for a North American reader, it takes them out of their comfort zone. The minute you can take a reader into another culture, they’re probably going to be more apt, or more susceptible to new things happening. Or non-traditional story elements. I think it also shows the universality of people. ‘Cause this could’ve been a story about all-white folks.

Hernandez: That’s what I’ve always found interesting – and I’ve learned this more from movies than from comics – when you’re studying film, they show you foreign films. And I’d watch something from, say, Sweden, and think This could be Latin America, or this could be Canada, or this could be Japan. I learned that you can be universal without sacrificing the culture. I learned that the closer to the culture you are when telling a story, the more universal the story becomes, instead of watering it down. That’s why The Twilight Children is going to work perfectly with a wide audience, because even though it’s specifically these people living in this little town, the characters are universal, and the things that happen to them – their feelings, or their reactions to things – anyone can relate to it.

Cooke: It’s funny, when I got the first script…my wife and I live in a fishing village in Northeast Canada. We live in a town with seventeen permanent residents. Like, our mail goes to two towns over. There’s literally no one where we live. And I’ve always wanted to do a story where I could reference this fishing village I live in. And it was like, Finally, I’ve got my fishing village story, and I can’t use anything I’ve got up here! [laughs]

Honestly, they had me at sci-fi set in Latin America! Check out The Twilight Children #1 from Vertigo, which is out today!