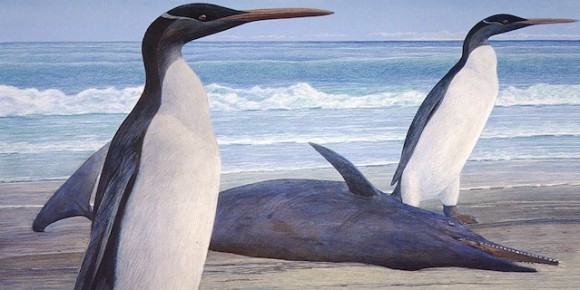 Paleontologists working in Antarctica have discovered the remains of a giant prehistoric penguin. How giant is giant, you ask?

That’s right. A six and a half foot tall penguin. Quick, to the time machine!

Giant penguin fossils are nothing new, but they tend to measure in between 4’6″ and 4’2″. Says researcher Carolina Acosta of this most recent discovery, “This is the largest penguin known to date in terms of height and body mass.”

The paleontologists who discovered the fossil, which they date to about 34 million years ago, are planning another trip to Antarctica see if they can find more. It’d be great if they did, of course. But I also like to imagine that the penguin they found was the Fezzik of penguins, a lone giant who through no fault of his own towered over those puny 4’6″ers. It’s not his fault he’s the biggest and the strongest. He doesn’t even exercise!

And then he can meet an arctic hare, and they both get hired by a Black-browed Albatross named Vizzini. But then the trio runs into a mysterious snow leopard (don’t ask how he got to Antarctica—just go with it), and the penguin and the hare end up having adventures with him. I’m not sure who Buttercup would be in this scenario.

Yes, I have turned this impressive scientific discovery into a The Princess Bride crossover. I’m not sure whether to be impressed or horrified with myself.