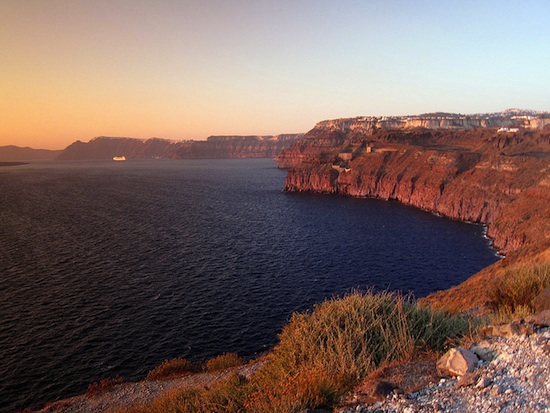 Large swathes of the Greek island of Santorini are covered in pumice from an enormous volcanic explosion thousands of years ago, a major catastrophe of the ancient world. Lately, the volcanic archipelago has seen some more geological rumblings, starting with a series of small earthquakes a couple years ago that marked the first seismic activity seen on the island in more than a quarter of a century. It now appears those quakes brought along some company, in the form of an underground balloon of magma that may be as large as 20 million cubic meters — so huge, it has raised the surface of the islands as much as 14 centimeters in some areas. Researchers with the University of Bristol published their findings — like the fact that the idyllic coastline in the photo above may well be a little bit higher now — this week in the journal Nature Geoscience.

It’s impossible to predict exactly when the Santorini volcanoes may go all Dante’s Peak again, this burst of seismic activity is exactly the sort of thing vulcanologists keep their ears to the ground for — after all, when islands suddenly look a little bit higher on the GPS, it is generally a cause for concern. The amount of magma that has risen into the chambers beneath the island matches estimates of what would be expected in a decade or two of geologic activity, taking place in a span of just over 18 months.

With that in mind, it’s worth remembering that volcanic eruptions don’t take place on convenient cycles, and that predicting them is tricky business. Even as the magma keeps rushing in, earthquake activity in the region has faded. It just goes to show, Mother Nature is a fickle creature that likes to keep us guessing, right up until she burps up millions of gallons of molten rock all over us.