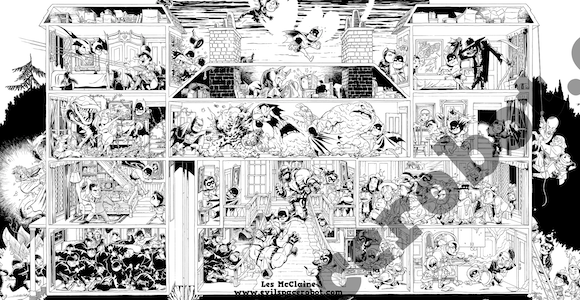 Is is a mural if it’s actually an enormous poster? Do I really care? Les McClaine has crafted this massive (you can only see about half of it above, and the actual file is too big for our image uploader) tribute to Batman, his family, and his Rogues’ Gallery, and it isn’t even finished. He’s vowed to color it. More pictures of Mayhem at the Manor below:

He uploaded this picture to show what the original art looks like. If you look really closely, you can see the pen that he added for scale. Here’s the whole piece (click to embiggen): 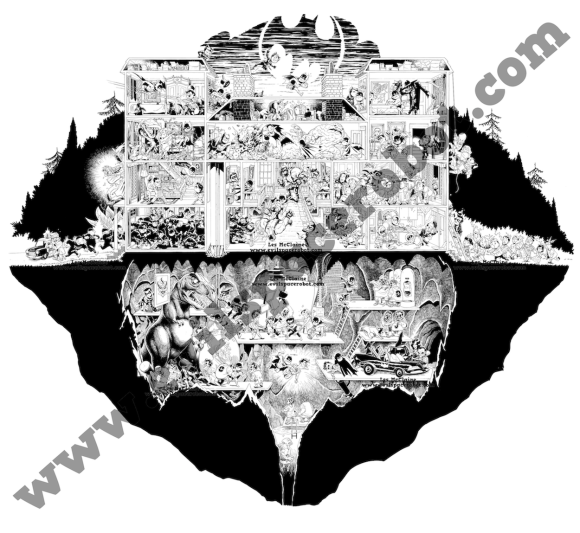 What’s going on here? Well, pretty much every Batman villain ever is storming Wayne Manor all at the same time. A horde of nameless goons and thugs streams in the front door as Commissioner Gordon radios for help, and his daughter handily takes them on inside:

Catwoman and Batman enjoy a rooftop chase, only to make up, smooch, and beat up the Scarcrow a couple of rooms to the right.

Mr. Freeze leaps out of the icebox only to find the real master of Wayne Manor’s kitchen too much to handle.

Of course, eventually Harley lures Batman down to the Batcave, and you can’t have a fight in the Batcave without somebody smashing Jason Todd’s costume case. Stephanie Brown’s case? Safe. Batman should really invest in some shatterproof glass for Jason.

Nightwing takes out Harley, Batman takes out the Joker,

And in the end, the al Ghul’s show up to disapprove of everything anyway. 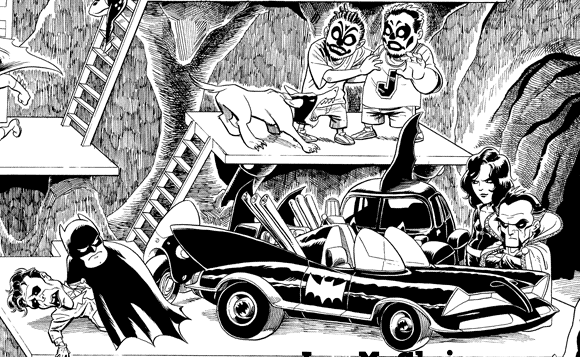 Also Ace. We watch this pice of art’s progress with great interest. See it at its highest resolution here.