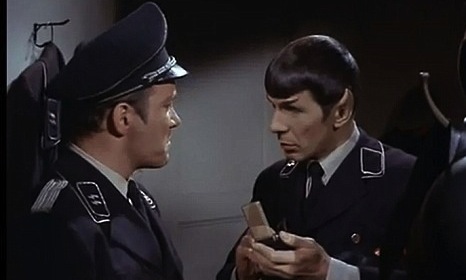 First filmed in 1968, “Patterns of Force,” an episode of Star Trek: The Original Series, has finally been aired in Germany after the country refused to show it on television. Why, you ask, would they have refrained from airing this particular episode of Star Trek? Well, it was the one in which Kirk and Spock dressed up like Nazis and referred to the World’s Most Terrible Genocidal Political Dictatorship as “the most efficient society ever created.” At a mere 20 or so years after the end of World War II, Germany had decided that at the time, airing the episode might be considered in bad taste. And they’re still extremely self-conscious about this Nazi thing — the episode ran at 10:00 PM and anyone under 16 was not advised to watch it. Set phasers to “too soon”!

“Patterns of Force” was offered on video back in 1995, but this marks the first time the episode appeared on the air. It is now also official that the series has aired in Germany in its entirety.

But Spock and Kirk don’t fight real Nazis — just an alien race that looks and acts exactly like them, down to the uniforms. Our space heroes don the uniforms to infiltrate an extremely Nazi-like regime on the planet Ekon. They wear brown uniforms complete with swastikas, operate under a Fuhrer, and are on a mission to destroy the nearby planet Zeon. (Which should sound familiar.) Spock and Kirk (respectively played by Leonard Nimoy and William Shatner, who both happen to be Jewish) are shocked about how the bizarro Nazis have been able to achieve such power and influence.

While the episode is generally seen as one of the “sillier” episodes of the series (it aired in the second season), a commenter at Daily Mail points out that the story was meant to show that even controlled political extremism used for positive purposes will ultimately become too corrupt and evil, despite its best intentions. You can see a clip of the episode here: