UPDATED: George Takei Accused of Sexually Assaulting a Man in 1981 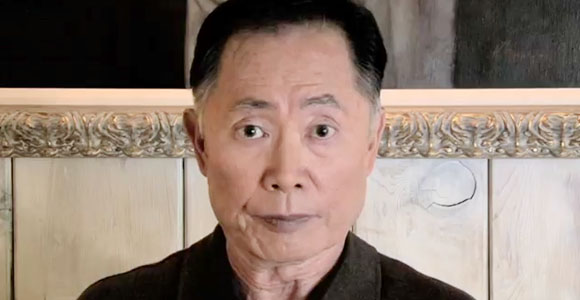 UPDATE: A recording of Takei’s appearance on Howard Stern appears to confirm that he assaulted someone. Asked, “Did you ever grab anyone by the cock against their will? … You’ve never sexually harassed anyone, have you?” Takei gets quiet, awkwardly laughs, and says, “Some people are kind of… umm… skittish. Oh maybe… um… afraid and you’re trying to persuade.” He then admits to some “grabbing” done “in my home.”

George Takei has been accused of groping an unconscious man in the early 1980s, according to a story in The Hollywood Reporter. Scott R. Brunton, a former model and actor, has come forward to say that Takei assaulted him in 1981. Brunton told THR he was moved to come forward after he found Takei’s response to the Kevin Spacey allegations -“infuriating.” He said, “I don’t want anything from him but an apology.”

Brunton met Takei was he was in his twenties and Takei was in his forties. After Brunton broke up with his boyfriend, he said Takei took him out to dinner and the theater, and then Brunton went back to Takei’s condo for a drink. “We have the drink and he asks if I would like another,” Brunton told The Hollywood Reporter. “And I said sure. So, I have the second one, and then all of a sudden, I begin feeling very disoriented and dizzy, and I thought I was going to pass out. I said I need to sit down, and he said ‘sit over here,’ and he had the giant yellow beanbag chair. So I sat down in that and leaned my head back and I must have passed out.”

“The next thing I remember I was coming to and he had my pants down around my ankles and he was groping my crotch and trying to get my underwear off and feeling me up at the same time, trying to get his hands down my underwear,” Brunton continued. “I came to and said, ‘What are you doing?!’ I said, ‘I don’t want to do this.’ He goes, ‘You need to relax. I am just trying to make you comfortable. Get comfortable.’ And I said, ‘No. I don’t want to do this.’ And I pushed him off and he said, ‘OK, fine.’ And I said I am going to go, and he said, ‘If you feel you must. You’re in no condition to drive.’ I said, ‘I don’t care, I want to go.’ So I managed to get my pants up and compose myself and I was just shocked. I walked out and went to my car until I felt well enough to drive home, and that was that.”

Takei has denied the allegations, stating in a series of tweets that, while he “do[es] take these claims very seriously,” the assault “simply did not occur.” He tweeted: “I’m writing to respond to the accusations made by Scott R. Bruton. I want to assure you all that I am as shocked and bewildered at these claims as you must feel reading them. /1 The events he describes back in the 1980s simply did not occur, and I do not know why he has claimed them now. I have wracked my brain to ask if I remember Mr. Brunton, and I cannot say I do. /2 But I do take these claims very seriously, and I wanted to provide my response thoughtfully and not out of the moment. /3 Right now it is a he said / he said situation, over alleged events nearly 40 years ago. But those that know me understand that non-consensual acts are so antithetical to my values and my practices, the very idea that someone would accuse me of this is quite personally painful. /4 Brad, who is 100 percent beside me on this, as my life partner of more than 30 years and now my husband, stands fully by my side. I cannot tell you how vital it has been to have his unwavering support and love in these difficult times. /5 Thanks to many of you for all the kind words and trust. It means so much to us. Yours in gratitude, George /end.”

(Via The Hollywood Reporter; image via screengrab)