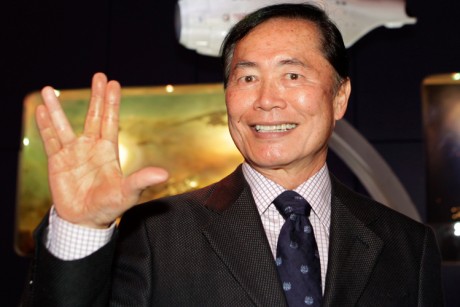 Rick Polito, the comedy writer behind many of the posts on George Takei’s Facebook page, feels bad about “letting the tribble out of the bag” on his ghostwriting involvement for the Star Trek actor’s page. He apparently sent Takei and husband Brad Altman an apology.

For those of you that didn’t get this news: yes, the truth can be a terrible thing. George Takei is not the only person writing jokes for his Facebook page.

Last week, Polito claimed he wrote jokes for Takei at a salary of $10 a pop. Fans everywhere gave a collective gasp and screamed “TAKEEEIIIIIIIII” to the sky with such passion it would make Shatner jealous.

According to Polito, he had no direct updating power over Takei’s page, but did write and submit jokes to it regularly.

I just said that I’d been looking for any mention of my book I could get and that I hadn’t meant to expose anything. I don’t update his page. I’ve had no direct contact with George. I’ve sent him some memes, as have other comedian types, and I was happy for the exposure.

Takei himself qualified the situation, explaining how his page runs and who runs it:

I have Brad, my husband, to help me and interns to assist. What is important is the reliability of my posts being there to greet my fans with a smile or a giggle every morning. That’s how we keep on growing.

Takei’s Facebook has become something of a legend. Filled with funny, snarky, Reddit-esque image and text posts, he has become the Facebook fanpage darling on the back of his sense of humor and regular updates. Polito himself once said: “He may not be a stockholder, but he owns Facebook.” That’s a bold statement, but when it comes to Facebook, it’s hard to contest Takei’s 4.18 million followers. There are few other fanpages on the site that can boast that kind of clout.

With a fan following of that magnitude, it’s no wonder the rumors of ghostwriting have sent murmurs of disappointment through the internet. To paraphrase a competing franchise: “It was like a million voices cried out in anguish, and then were suddenly silenced”.

(via The Hollywood Reporter and The Daily Dot)