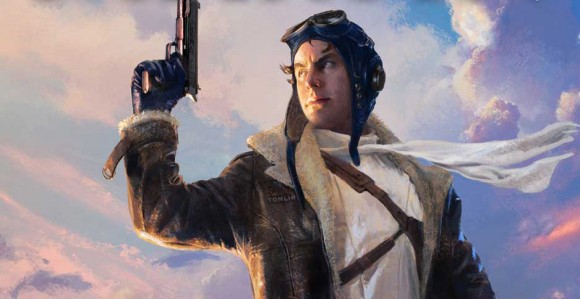 With all the Game of Thrones hoopla these days, you may not be aware that author of the best-selling A Song of Ice and Fire series, George R. R. Martin, has also been involved with a long-running science fiction and superhero fantasy anthology as well. It’s called Wild Cards and it’s just been optioned for a movie by Syfy Films and Universal Pictures. The future is coming…?

The series was originally published back in 1987, as the Hollywood Reporter points out, the same time as Frank Miller‘s The Dark Knight Returns and Alan Moore‘s The Watchmen were being praised by the comic industry. Wild Cards, “provided an alternate history of Earth and told superhero stories grounded in realism, a strategy that would be emulated in both comics and, later, in movies such as the recent Christopher Nolan-directed Batman films.”

“We had a love of comics books and superheroes that we grew up on,” said Martin, “But we approached the material differently. We wanted to do it in a grittier, more adult manner than what we were seeing in the ’80s. It’s something that many other people have been doing in the decades ever since.”

The Wild Cards anthologies are set in a shared universe where an alien virus hits New York City in an alternate history of the world post-World War II. “Those who survived were turned into either a class of beings named Jokers, mostly deformed creatures, (or more rarely) Aces, who have special powers,” writes THR.

Martin collected and edited the series which includes stories by himself and Roger Zelazny, Lewis Shiner, Chris Claremont and more. The series is now on Volume 22 and has switched publishers through the years. More recently writers such as Paul Cornell and Carrie Vaughn have contributed. Melinda Snodgrass, one of the co-creators and co-writers, will be writing the script which she will also executive produce with Martin.

A long-time comic book fan, Martin appreciates that Wild Cards doesn’t have the same confusing continuity as comics tend to. “One of the things we have going is the sense of history,” he says. “The comics in the mainstream are doing retcons [retroactive continuity] all the time. [Heroes] get married, then one day, the publisher changes his mind, and then they’re no longer married. To my mind, it’s very frustrating. [Our stories] are in real time. It’s a world that is changing in parallel to our own.”

The series has been optioned before but this is the furthest along they’ve gotten. This is also the first acquisition for Syfy films. “This is, beyond Marvel and DC, really the only universe where you have fully realized, fully integrated characters that have been built and developed over the course of 25 years,” says Gregory Noveck, Syfy Films’ senior vp production. “The trick for us is to find what’s the best movie.”

Not too many details were given but Martin did say a film would take place in contemporary times and that one of the first Aces, The Sleeper, would feature.