Check Out the Wild Geometric Snow Art of Simon Beck 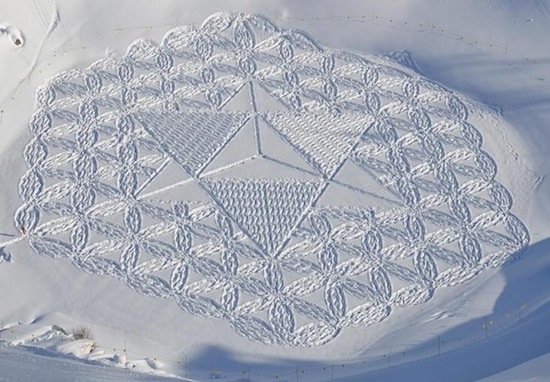 No need to bring in the FBI or Mel Gibson, because these intricate, crop circle-like patterns in the snow weren’t left behind by aliens with a knack for artistic design. British artist and competitive orienteer Simon Beck has been making these trampled snow art pieces since 2004 at the Les Arcs ski resort in France. Relying on computer mapping and the years of orienteering skills under his belt, Beck is able to create precise geometric patterns in the snow based on his projections and local landmarks in the area. And the only tools that Beck uses when out in the field is the pair of snowshoes on his own two feet. Too bad the only thing we do with snow is throw rock salt on it which, last time we checked, is an unappreciated art form.

We strongly advise that those living in more urban environments don’t try to replicate the artistic process of Beck’s trampled snow art. Aside from the lack of adequate space and orienteering skills, one runs the potential risk of stomping through frozen dog mess hidden beneath the snow. That’s, uh, speaking from experience.