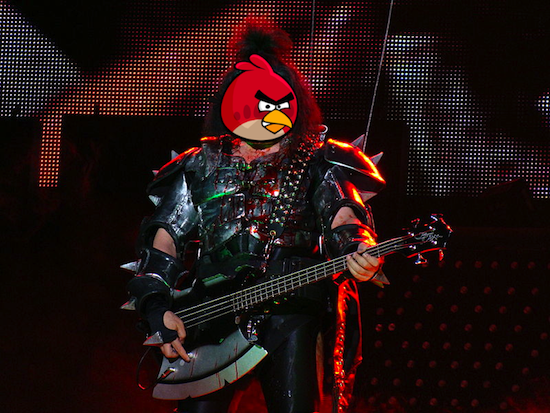 Gene Simmons has a lot more going on upstairs than you might think. In a recent interview with Industry Gamers, the legendary long-tongued bassist for KISS showed his business accumen while discussing the various projects he’s working on, including a digital translation service called Orstbo (did you know Simmons speaks five languages? Crazy!). Dear to his heart is an effort to take the KISS brand to places it has never been before, such as a Hello Kitty line and appearing in Archie Comics. However, Simmons dropped a real bunker buster by saying that he’s working on an Angry Birds deal. Yes, that Angry Birds.

Simmons, it seems, has been expanding the KISS brand and sees video games as part of the KISS ecosystem. Also, theme golf courses and Archie Comics. You can’t make this stuff up. From Industry Gamers, emphasis ours:

Well, we’re talking with Sony games now. We are really trying to take it in areas that haven’t been done before and have stayed out of the marketplace because the ideas simply weren’t exciting enough. So while the gaming world is waiting for the KISS games that are going to explode, we’re busy taking the brand to places where no band has gone before. So Hello Kitty is one of the biggest brands on planet Earth. Now there’s KISS Hello Kitty, which we’ve already launched in 90 countries. We’re talking with Angry Birds, KISS and Angry Birds, which will become a deal. The KISS and the Archie world have now teamed up and the first issues of KISS Archie comic books hits the world this month. KISS golf courses are starting in Las Vegas right across from the Hard Rock. That opens in January. It’s just endless what we can do, but we only do things when it’s right. Just because there are games, and just because there’s this or that out there, unless the deal is right and unless the content is exciting to our fans, we don’t do it.

Sadly, there isn’t any further information about when, why, and most importantly how a KISS Angry Birds game will work. Simmons goes on to say that he’s met with the Rovio people and familiarized himself with Angry Birds by playing a few rounds, but it doesn’t seem like he came to them as a fan. Pairing the Birds comment directly after mentioning the KISS-Hello Kitty relationship seems to provide all the information you need on why Simmons is going forward with the deal: Angry Birds is the most popular game on the popular iOS platform, and Simmons wants in.

Sure, Simmons says that exciting content for his fans is what drives all of this, but this is Gene “Snake Tongue” Simmons we’re talking about here. For him, perhaps moresoe than most, size matters. If Simmons was purely driven by artistry, then KISS would never have appeared in Archie comics.

While it’s easy to dismiss Simmons’ scheming as half-baked and cynical, his strategies are clearly working. The band has only put out one album since 1998, though another is slated for release this year. Despite being several decades away from modern music, KISS has remained in the spotlight and in the American consciousness. We’ll just have to wait and see how iPhone games will fit in the with rest of the KISS operation, or just sit back and marvel at the mad genius of it all.