Tracing the Origins of Gender-Specific Clothing for Children 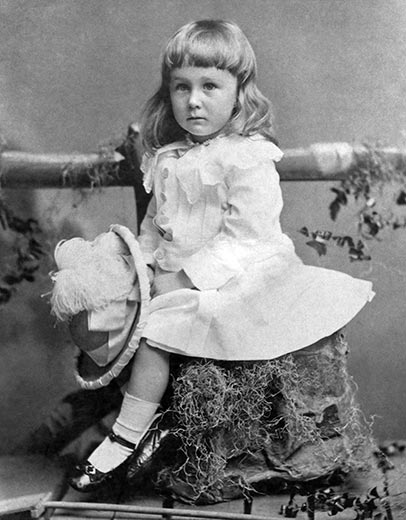 The child pictured above is our 32nd President of the United States, Franklin Delano Roosevelt. And indeed, he is wearing a dress, as was customary in the late 19th century. Smithsonian Magazine has a really interesting article about when gender-specific clothing started being worn (and marketed) towards children. (Answer: Not until around World War II.) Shall we take a walk down memory lane, when girls wore blue and boys wore pink, but mostly everyone wore white?

Let’s start at the end: the present. According to Jo B. Paoletti, a historian at the University of Maryland and author of Pink and Blue: Telling the Girls From the Boys in America, a lot of the blatantly gender-specific clothing came about as a result of parents wanting to know the sex of the baby they were having. In the beginning, babies and young children (until the age of 6 or 7) wore white dresses. This was more out of convenience — whites can all be washed together. But by the early 20th century, it seems like designers wanted to give more definition to how children were distinguished. However, pink was for boys. From a 1918 issue of Ladies Home Journal:

“The generally accepted rule is pink for the boys, and blue for the girls. The reason is that pink, being a more decided and stronger color, is more suitable for the boy, while blue, which is more delicate and dainty, is prettier for the girl.”

Maybe this has to do with pink being a softer version of red? Not really sure, but sometimes the color choices were based on hair color (still not gender). By the time the baby boomers were born though, that was when boys dressed like miniature versions of their fathers, girls like their mothers (except for playtime).

The first feminism movement rejected this, as we know, and started promoting anti-feminine/anti-fashion attitudes. Women would dress androgynously, even masculinely, which was meant to kill the visual separation between men and women. And this extended into clothing for babies and children — pink clothes for toddlers weren’t even sold for two years in the 1970s in the Sears, Roebuck catalog.

“One of the ways [feminists] thought that girls were kind of lured into subservient roles as women is through clothing,” says Paoletti. “ ‘If we dress our girls more like boys and less like frilly little girls . . . they are going to have more options and feel freer to be active.’ ”

But clearly, this is not the case now, and Paoletti noticed it in the 1980s when she had her own children. The shift happened within a couple of years, and while clothing had started heading into gender-specific territory, it swung back into it with full steam. Overalls for boys weren’t just blue — they had sports imagery on them too. And if you take a walk through any girls’ clothing section, it’s not just pink — it’s hot pink. Sometimes glittery. This isn’t considered to be a step back. More like embracing femininity while playing the same games as the boys.

“Even if they are still feminists, they are perceiving those things in a different light than the baby boomer feminists did,” she says. “They think even if they want their girl to be a surgeon, there’s nothing wrong if she is a very feminine surgeon.”

However, this mostly had to do with individualized marketing towards expectant parents who underwent prenatal testing. (Well, as “individual” as can be when the two individuals are entire genders.) If parents knew they were having a boy, they could buy all the cool boy stuff available. Not too far removed from the act of choosing a name. Then, when they had a girl, they would buy all kinds of (girl) stuff, just for that girl. (I doubt my father thought “I can’t wait to teach her about football and firefighting!” when he found out I was going to be a girl. But it probably crossed his mind when he found out my brother was going to be a boy.) A lot of parents still decide to not to find out about their baby’s gender (like in ye olden tymes), so in this culture of oversharing, they still like to be surprised about something. This has resulted in more gender-neutral baby (and toddler) clothing.

But once again, there is a push for gender-neutral clothing now that more parents are realizing they might be forcing their children into someone else’s ideals. Take, for example, Dyson Kilodavis, the subject of his mother’s book, My Princess Boy. He dresses like a princess, sparkles, tutus, etc. and his mother is completely behind him. Is he wrong? To some, he’s gender bending, “breaking the rules” of boyhood. But to others, he’s simply dressing how he wants. This is what makes him happy and comfortable. There has always been a bit of a debate about tomboys and tomgirls — girls seems free to dress like a boy (though some still catch flack for “dressing like a boy” instead of just “not dressing feminine”) but when a boy dresses like a girl, he’s seen as deviant.

This is an interesting study in how back-and-forth this concept has come and gone since less than 150 years ago. What will we, as a generation, teach our own kids about gender roles? And then change our minds about it?