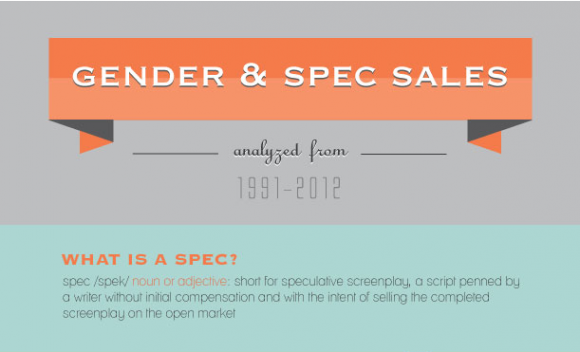 The number of women successfully selling spec scripts for movies, as opposed to writing in television and print, has gone down considerably over the course of the past 20 years.  Suzana Orozco sorted through the best available data, the Definitive Spec Script Sales List, to arrive at the conclusion that the number of women successfully selling specs, or speculative screenplays written without guarantee of compensation, has decline from 1991 to the present.  While there has been an overall decline in spec sales since the peak in 1995, regardless of author, the number of women selling specs has had a more noticeable decline, in terms of percentage of scripts sold written by women.

Orozco has provided a graphic that not only shows the decline in female spec script sales, but how this number of successes measures up to women in other writing fields.  For instance, where the percentage of women successfully selling specs on average over the past 20 years is around 12.5%, the percentage of female TV writers is just over 14%.  More telling, the percentage of NY times bestselling authors who are female over the past 20 years is 50%.  This indicates a more balanced ratio of female to male writers, though still not a very good ratio, in TV than in specs, and a much more equal proportion of male to female writers in bestselling books.

The data that Orozco has compiled and analyzed shows not only that there is a great gender imbalance in screenplay sales, but that women in other forms of media, and particularly books, do not face the same amount of inequality.  This shows, if there was even any doubt, that women are certainly writing our entertainment, though it would be interesting to see the number of specs written by women in comparison to men as well.  Sets of data only show us the problem, but it’s more interesting to consider why the numbers are as imbalanced as they are.  For instance, according to Scott Myers at Go Into The Story, among the applicants for the 2013 Nicholl Fellowship in Screenwriting, 28.9% were women.  However, even with less female screenwriters applying for such opportunities, only 12.5% or so of the scripts sold were from females.  This indicates that even if the number of women writing screenplays is smaller than men, and even smaller number actually end up able to sell their specs.

You can take a look at Orozco’s beautifully organized data for yourself below, and draw your own conclusions, but the trends are fairly obvious. 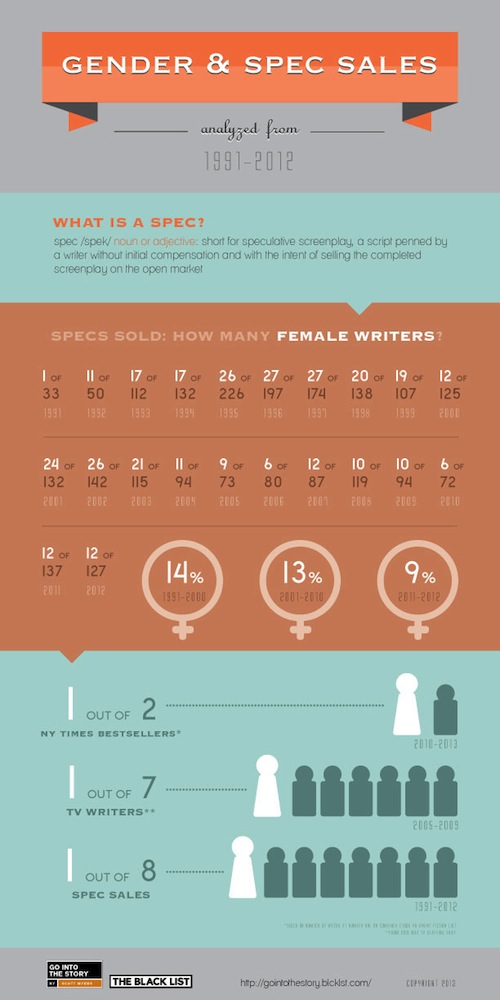