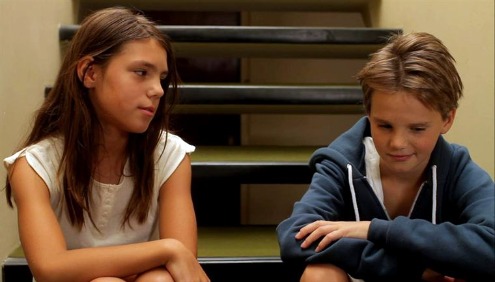 Over on the Together For Jackson County Kids blog on Tumblr, one Wisconsin teacher is making an effort to tear down gender stereotyping of children by telling them “It’s okay to be neither.” Melissa Bollow Tempel writes her story about the kids she’s taught and how she goes out of her way to make them feel accepted no matter how they look, even if they’re a girl who wears hoodies from the boys’ department.

Tempel admits that when she first heard a kindergarten teacher was teaching children about gender stereotypes in class — that’s her kindergarten class — she thought it was ridiculous. Teaching five-year-olds about sociology. But once she became a mother and was faced with buying her daughter clothes, and coming up … pink, she realized it might not have been such a bad idea to teach kids about acceptance after all. (She also went ahead and dressed her kids in “boys’ clothes.”)

But then, in her own classroom of first-graders, she met Allie, a girl who also didn’t dress in pink:

Allison was biologically a girl but felt more comfortable wearing Tony Hawk long-sleeved T-shirts, baggy jeans, and black tennis shoes. Her parents were accepting and supportive. Her mother braided her hair in cornrows because Allie thought it made her look like Will Smith’s son, Trey, in the remake of The Karate Kid. She preferred to be called Allie. The first day of school, children who hadn’t been in Allie’s class in kindergarten referred to her as “he.”

Tempel went as far as calling Allie’s mother to see how Allie wanted to be referred — as a boy or a girl. And Allie said to tell the other students she was, indeed, a girl. So when she told the class, the students started asking her why, if she was a girl, did she dress like that, and didn’t she know she wasn’t supposed to.

And that was when Tempel started teaching sociology to her own students. One of the main lessons includes making a list of what boys like and what girls like: toy cars, dolls, makeup, Legos, etc. And then she’d ask if girls could play with what was on the boys’ list and vice versa. From there, kids realized that not only did they like things identified with their opposite gender, but it was okay to like them.

I could see the gears turning in their brains as the gender lines started to blur.

Then there was the more visceral, awkward part of gender identification: the bathroom. Allie, in particular, was often accused of getting on the wrong line. So Tempel divided the lines differently: by popsicles vs. ice cream, skateboard vs. bike, beach vs. pool, and even more choices that not only made the kids smile and think, but see that there was no reason to divide themselves by gender. Then came lessons on embracing being different from others and being okay with the choices they make:

Toward the end of the discussion I explained: “People make all kinds of different decisions about gender. Sometimes, as we grow, we might not want to pick one or the other, and that’s OK; we don’t have to.” I wanted them to begin to see that our lessons were not only about expanding the gender boxes that we’ve been put into, but also questioning or eliminating them altogether.

While Allie still faced some criticism from less-enlightened students (and her own grandmother, as Tempel recounts), things did become easier for her at school. And now, Tempel gets emails about her male students wanting a Baby Alive doll. And that’s more than okay — it’s a big step forward.

(via Together For Jackson County Kids)