But We Knew That Already: Social Outsiders Are Better Prepared to Succeed After Graduation 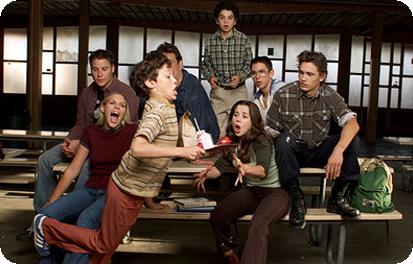 An interview on Salon with author Alexandra Robbins, who has just written The Geeks Shall Inherit the Earth, has concluded what we’ve known for years: being popular in high school does not necessarily mean you’ll be successful as an adult. And further, the qualities that make someone an outsider will help them succeed where the popular kids failed. Hey, welcome to the nerd party! It’s been going on for years, actually! But here was a rather upsetting finding by Robbins: the teachers might be making the high school social environment worse.

First, the obvious stuff, which is still kind of interesting, but a version of things we’ve been pretty aware of. Robbins believes that pop culture plays a significant role in popularity (I know: duh) in that being popular does not necessarily mean being well-liked. There seems to be a parallel to reality television, in which the most popular characters are not well-behaved, do the most controversial things, and have a lot of influence (and camera time). (“I’m not here to make friends” might ring a bell.)

Our culture is unusually and increasingly concerned with popularity. Part of the reason is our obsessive celebrity culture, and there also seems to be a trend to define young people as either smashingly successful or not, which comes into play in academics and in the social world. The number of outsider labels in schools is increasing, while the ideal image of a mainstream popular kid is narrowing. While perhaps 2 percent of the students in high school are popular and mainstream, the rest of them are outsiders. Either you’re popular or you’re not. There’s no middle ground any more.

But high school is such a conformist atmosphere where students are not really asked to be unique. They’re asked to follow the rules, listen to authority, and don’t rock the boat. Where exactly does that get you in adulthood when you’re trying to forge a career? Nowhere. So, where does that leave the nonconformist outsiders? With the advantage. Robbins calls this the “quirk theory.”

So, that’s settled. But what about the teachers and their influence? After all, they’re the guides whose examples the students are expected to follow. Robbins says they’re part of the problem because they’re forming their own cliques, including one called “Teachers Against Dumbasses.”

The students are aware of which teachers are allied with others. They hear teachers grumbling; they know when teachers are dating each other. Even worse, often the teachers are making associations and judgments and in some cases explicit descriptions about students based on their labels. You can’t expect students to know what appropriate social behavior is when the teachers aren’t following that model themselves.

Well, that’s not very encouraging, when the teachers are acting like the Plastics.

Robbins goes on to talk about how “bitch” has become a Machiavellian badge of honor and that in some schools, minorities are instantly considered to be outsiders, as if there was no chance they’d become popular. She also says that — let’s say it together — it gets better. And it does, as long as teenagers realize that being a Kardashian is not a viable career path (unless you’re also willing to release a very humiliating sex tape).