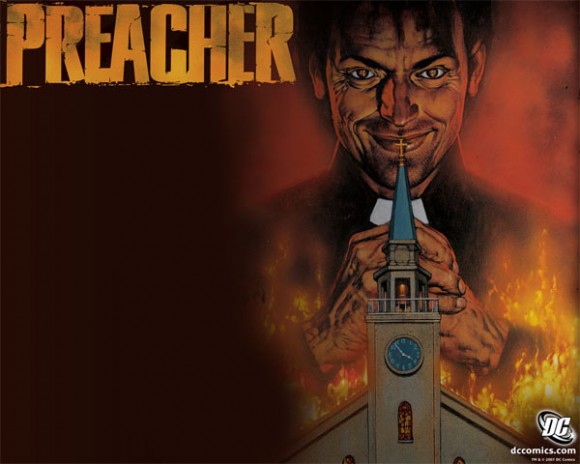 Following the screening of his directorial debut Stitched at San Diego Comic Con, Garth Ennis took some questions and the subject of Preacher came up. After a possible HBO series fell apart a few years back, would there be a movie? Ennis had a few words on it, but nothing definitive:

“Last I heard it was at Sony and they have DJ Caruso up to direct it. That’s all I know at this point.”

Hmmm. Doesn’t sound like Ennis is all that involved in the adaptation of his own comic. So, what’s really going on with this?

Judging by this quote by Ennis, it’s possible that he thinks a movie won’t do his story justice:

“[A series] would give the story room to breathe. But in the end, it was an awful a lot of money in something they didn’t have confidence in. And that was that.”

At one point, Sam Mendes (American Beauty, Revolutionary Road, Away We Go) was attached to direct a Preacher movie for Columbia Pictures, but that deal fell apart. Back in February, Caruso (Disturbia, I Am Number Four) announced that he was “f*cking pumped” to direct the movie. Well, at least he’s excited! Let’s hope that Ennis’ seeming lack of enthusiasm is nothing but limitations as a result of necessary agreement secrecy.

(Shock Till You Drop)