Gaming Up Is Hard To Do 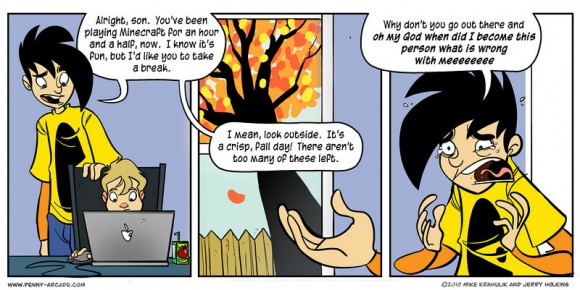 If I had a nickel for every time I said that in my retail gaming career, I’d have been way happier with my paychecks. Even more so if I’d got a dime for every time a parent cavalierly said, “Oh it’s fine. After all, it’s nothing he doesn’t see at school.”

Really? Really, ma’am? Where do you live that little eight year old Jimmy here sees hookers get picked up for health, then run over by the John so can get his money back? On the regular no less.

Of course, any mention of hookers would usually cause at least a second thought, however fleeting…before caving in. Because even though the ESA says that 86% of the time children receive parental permission before purchasing a game doesn’t mean it is an informed decision. And there is always something slightly disturbing about parents that believed gore and extreme violence to be okay but nudity or adult relationships were a deal breaker.

God of War would be a perfect example for this. Kratos wearing the ashes of his dead wife and children while viciously slaughtering everything in sight? Oh that’s fine…WHAT DO YOU MEAN THERE IS A SEX MINI-GAME WHERE YOU SEE NOTHING?! PUT THAT GAME BACK RIGHT NOW!

Lady, Jimmy is going to grow up with some serious sexual issues but I’m just going to smile and sell you Saw II instead.

Apparently, I am a stick in the mud.

How did this happen? I always thought I’d be the cool mom. I think most women do. No one wants to be that mom. The one that wouldn’t know the difference between emo and hipster if her life depended on it. (Emo wears more black, right? Oh God…) But somewhere along the way, one of the things I was sure would make me “cool” has turned on me. Suddenly, I’ve realized I don’t want my children exposed to the stuff I play. But why? Because I understand that video game is not synonymous with toy. That just because it plays in the console doesn’t mean it is age appropriate for my kids.

However, the boy is recently a pre-teen (eep!) and entering the murky waters of peer acceptance, where to be different is to be left behind. Am I being too overprotective? Will letting him play M-rated games really damage his psyche? Depends. Probably not
if it’s Halo, which is the most laughably tame M-rated game in history. However, Dead Space 2… not so much. But for most of his peer group, the parents don’t seem to know the difference. While a whopping 93% of game purchases are made with parents present, only 64% of them believe gaming to be a positive part of their child’s life. Maybe because present isn’t the same as paying attention? Naaaah.

And then there is the panic attack inducing fear of Online Play. Sure, the world isn’t full of Pedobears lurking in the corner and waiting to offer him candy and unicorns. But I do know all to well the hateful rhetoric that is spit out on a consistent basis online all in the name of “fun”. Half the time from children his age that have a negligible idea of what those venom filled words mean, even as they regurgitate them.

So where is the line? When is it time to cut the wired controller cord and let him wander off into the land of online play and mature content?

The truth is, I’m not sure. I have no precedent for this. I can’t ask my mom on this one. Besides, every kid is different. Every parent has their own rules about when certain social milestones can be attained. Gaming should be one of them; like dating and cell phones and setting the alarm to wake up for school on your own. So for now, I have to trust him to trust me. To play the games I feel he is emotionally ready for and to not sneak in a game of GTA at a friends house (even though he will).

And I can hope that as our generation ages up and starts making more baby gamers that this will become a more prominent discussion. Not only among parents and children but parents and parents. Just as you wouldn’t assume it is cool to drop off your child and a friend at the mall without getting consent from their parents, one should not assume that it’s okay for your child and a friend to play Call of Duty online without checking first.

What do you think? Should parents make a concentrated effort to be more informed about what their kids are exposed to, both online and off? Or am I making a mountain out of a digital mole hill?

You can read more of Donna Dickens over at Buzzfeed.