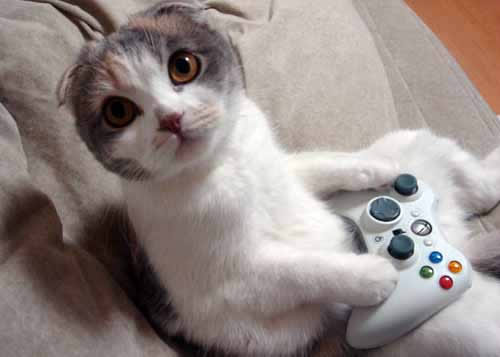 A new report by the Entertainment Software Association has the latest statistics about the gaming industry, sending a message that such a successful, widespread industry would probably be a good place to focus on concerning job growth — 72 percent of the American population plays video games, so perhaps America would be a great place to hire people to make them. Other new stats: the median age of gamers has increased to 37, the percentage of female gamers increased to 42 percent, and the country spent over $25 billion on video games. News of the Obvious: the video game industry is pretty gigantic right now.

The report, entitled 2011 Essential Facts About the Computer and Video Game Industry (and can be downloaded in pdf form here) has revealed some new numbers about female gamers, including their growing presence in the gaming audience. As of 2010, 42 percent of the gaming audience is female, up from 40 percent the previous year. And interestingly enough, turning the whole “video games are for teenage boys” stereotype on its head, women 18 and older make up more of the gaming audience than boys 17 and younger. 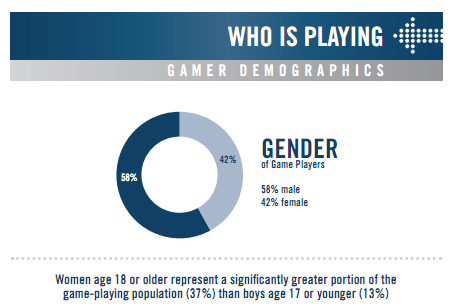 Women also make up 48 percent of the people who actually buy video games, though this could also include mothers of kids who do the actual playing. But wait a minute — some of those moms are also playing. The report says that 45 percent of parents play video games with their kids for a variety of reasons. 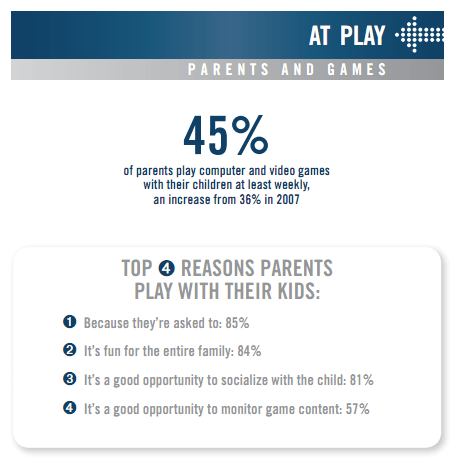 And thanks to the increasing prevalence of motion controls, 59 percent of parents feel that video games provide more physical activity now than five years ago.

The median age has also increased from 34 to 37, which could mean a couple of things — those gamers who started out on Atari and Pong are getting older and still playing video games. Or, an older audience is discovering games for the first time, probably a little bit of both.

The rise of games that can be played on smartphones probably also accounts for a more diverse audience of gamers. People not necessarily attracted to traditional console games have found love with downloadable games like Angry Birds as well as strategy and educational games. In fact, 55 percent of gamers play on portable devices.

Then there are gamers who don’t feel the need to spring for a console and simply use their computers. Online gamers account for 19 percent of the entire gaming audience; puzzle/card/trivia games make up 47 percent of computer-based gaming. Role-playing games and MMOs accounted for 32 percent of computer based games. World of Warcraft — an MMORPG — has six titles on the list of the top 20 best-selling computer games. 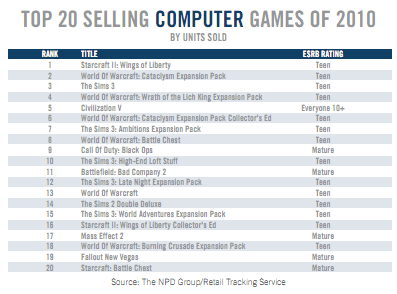 This study doesn’t go into specifics about which genders are buying which games, marketing, further breaking down the demographics, but there is a very big emphasis — by members of Congress — on how the video game industry in the United States has had a positive impact on education, technology, and the economy. Here are quotes from Rep. Debbie Wasserman-Schultz (D-FL) (who is actually a co-chair for the Congressional Caucus for Competitiveness in Entertainment Technology, which exists):

The U.S. entertainment software industry is at the forefront of innovation and education, turning what we have thought about video games on its head.

This growing industry has generated more than 120,000 jobs in over 34 states and is a major international player as well. It’s time Congress took notice.

Now that we’ve reflected on these statistics, let’s imagine how fun it must be for the Congressional Caucus for Competitiveness in Entertainment Technology to conduct fact-finding missions.