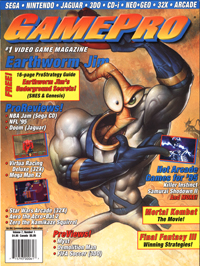 Sad day for gaming and print publishing in general, as parent company IDG decided to shut down venerable gaming rag GamePro and its corresponding website. Though an issue of GamePro was many gamer’s first gaming publication — including mine, specifically the January 1995 issue shown to the left — IDG cites not pulling in enough ad revenue as the reason for shuttering the magazine and website. The November issue of GamePro will be its last, and starting December 5, GamePro.com will point to PCWorld.com.

GamePro Media will still be around, but will be refocusing on its “custom publishing and solutions business,” namely, creating specialized content for vendors. Earlier this year, GamePro Media’s VP of content Julian Rignall spoke to Gamasutra regarding the state of print media, and unfortunately, his gloomy outlook manifested in the worst way:

“Magazine distribution has always been a huge challenge in America. You pay huge fees to get it on the newsstand, distribution’s kind of screwed up. It’s never been a particularly great business, and in this day and age, it’s even worse.”

GamePro magazine began in 1989, and recently went through some unhappy changes, including lowering the magazine’s release cycle from monthly to quarterly, as well as getting rid of the author pen names and the accompanying cartoony pictures, which many GamePro readers will remember — rest in peace, Air Hendrix.

Though IDG does admit there will be some layoffs, game reviews and news will be rolled into PCWorld, so at the very least, the GamePro tradition will somewhat live on over there.

It’s a sad time when a gaming magazine we grew up with goes under. Goodnight, sweet prints.