Game of Thrones: In Review 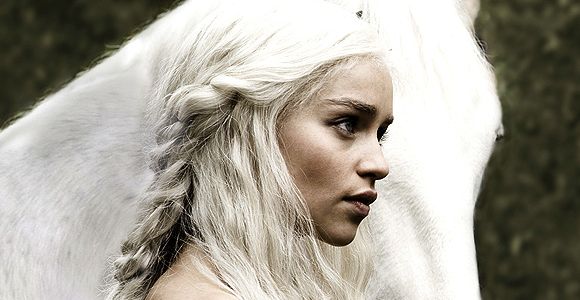 The evergreen panoramics and sprawling landscapes of the first episode of Game of Thrones easily call to mind that old standard-bearer for live fantasy . But don’t be fooled: the maggots crawling in lurid detail over the corpse of a moose make it clear — this isn’t your grandpa’s Lord of the Rings.

Approaching the first episode of Game of Thrones, “Winter is Coming,” from a total outsider’s perspective was an interesting ordeal. Most of my fantasy reading was done before high school ended (N.B., that’s not an implicit criticism but an apologia for potential obviousness a-coming), and so while I had a general idea of a Standard Fantasy Setting, the territory was years untrodden.

Having not read the books, I can say that the show isn’t near as confusing as some have made it out to be. If you can keep general hierarchies and a few different human races in harmony with each other in your head, you’re halfway there. I don’t think keeping track of the characters is any more difficult here than it was on The Wire, for instance.

And a lot of Game of Thrones is common ground. You can get lost down that Standard Fantasy Setting rabbit hole for hours and feel fairly solid on the basics, I think. You’ve got your fantasy regulars (including the inimitable Peter Dinklage as a lecherous dwarf), your bodice-ripping sex, your Yin-Yang light and dark races at odds, etc etc.  Unless you’re a total newbie to the genre, you’re going to get it, and the appeal of it.

There’s a lot to like about Game of Thrones: the aesthetic is simply stunning, opening in an icy, foreboding woods out of any Grimms fairy tale and traveling through barren plains (Winterfell) and lush, cool seascapes (Pentos). HBO hasn’t spared any expense on setting, and it’s a lovely change from the more mundane surroundings of the likes of Big Love and Boardwalk Empire. Someone’s set designer is a very happy set designer, indeed.

The casting, too, is impeccable. Lena Headey as the ice-cool Queen Cersei is a thrill to watch, as is Emilia Clarke as the reserved but watchful Daenerys Targaryen (these names will give your spell check a work out, as an aside). It’s nice, too, to see Mark Addy get back to serious work as King Robert (as opposed to his Herculean try for “comedy” on the now-ended sitcom Still Standing).

I do have a few issues with the show, however, and bear with me as I tease them out.  Remember that I have no future sight as to what happens with these characters — which is how most viewers, I think, are coming to the show, so it’s a valid perspective to consider. I do hope that Peter Dinklage gets more to do than play the bawdy dwarf role, since his talents are vast and what we’ve seen so far only sufferable because of that very important casting. And the show is slightly overplaying its hand with the occasionally cartoonish violence and gratuitious marriage orgies.

The major issue I had with “Winter is Coming” was the formation of the dark and swarthy savages (the Dothraki) versus the ethereal, silver-haired Targaryens. It’s such commonly trod literary ground to fix dark-skinned races as a dangerous foil to the mild and angelic near-albinos that I don’t much need to tell you there are some Unfortunate Implications to this dichotomy, very much smacking of racial undertones. For one thing, positioning the Dothraki as the potential army that will earn the Targaryens back the throne gives the relationship between races an on-the-backs-of-slaves feeling that I’m not altogether comfortable with. Because, we’re left to wonder, what happens to them once that throne is won? One gets the feeling that Viserys, the new king, won’t exactly be elevating his new brother-in-law, warlord Drago, to a position of power. (It’s worth it to mention that light does not equal good automatically here. Viserys is clearly a disturbed party who’s itching for some comeuppance.)

In addition to this overriding dynamic, the marriage of 13-year-old Daenerys to Drago is covered in cringe factor. One of Daenerys’s few lines in the episode expresses a disinclination to marry him, only to be told by her brother that as far as he is concerned, her body is up for grabs (sometimes his grabs, ickily enough). She is quietly terrified at the extremely violent and sexual wedding party, every moment of which is transmitted in frantic and abrasive energy. The editing, at least, infuses the scene with a type of exoticism, with which the relative normalcy of the Targaryens is contrasted. And take the scene where Drago has chosen as his honeymoon suite a rocky bluff over the sea (what, savages don’t enjoy a comfy down quilt as much as the rest of us for procreation?). Against the harsh and visually violent setting of the rocks surrounding them, Drago rapes Daenerys, and the mise-en-scene is maximized to suggest a dark brutality against her fair body.

Now, I’m led to believe by my A Song of Fire and Ice stans that this is actually a deliberate change — that Daenerys consents to her wedding night in the novel and comes to love Drago in time. I have little doubt that she will come to love him on the show, too, but instead of the narrative of a woman coming into her own in a different culture, we will now have a raped woman coming to love her assailer. That’s a problematic figuring, and the decision to change it from the book has me scratching my head and feeling dubious. But I am willing to see where it goes.

And, after all, they didn’t kill the wolf puppies. Game of Thrones has a believer in me.