Game of Thrones Recap: Garden of Bones | The Mary Sue 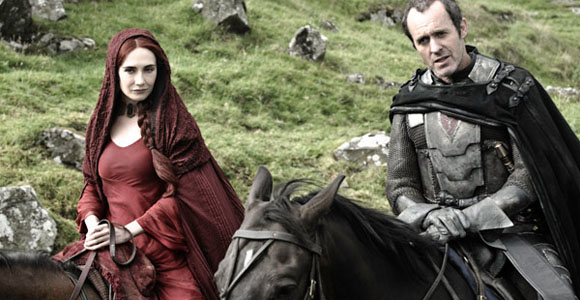 Editor’s Note: HBO’s Game of Thrones went completely off the rails last night. Find out what Amy Ratcliffe thought about the big happenings (as well as some comparisons with the novel) and let us know how you felt about it all in the comments!

(Spoilers ahead of course, book talk is at the very end if you want to avoid it. And catch up with last week’s recap if you missed it!)

Tonight’s episode of Game of Thrones started with a fart joke and ended with a monstrous birthing. No, really. I couldn’t make that up if I tried.

We get some good direwolf action in from the get go. Two Lannister men are standing watch, one thinks he hears a noise, and the other farts as a joke. Surprise, there actually was a noise and the next thing the men see is a giant direwolf and its teeth. Skip a shot or two and the battle is over. I know the budget is stretched, but I hope we get to see an epic battle occur rather than just cutting to the aftermath. The scene establishes another victory for Robb and the North, and it also puts Robb in the position to have a conversation with a nurse of sorts, Talisa, about what he’s doing and how his actions affect the innocent. By the by, Robb seems to like the nurse if you know what I mean.

In King’s Landing, King Joffrey keeps it classy as ever by punishing Sansa for her brother’s victory. He has his Kingsguard beat her and start to strip her in front of the court. Luckily for her, Tyrion arrives in time to stop the disgrace. I like that even though Joffrey seems to be over listening to his mother, he always seems to pause when Tyrion puts him into his place. He’s indignant about it, but he doesn’t push back like he does with Cersei. I think it’s just because Tyrion isn’t a woman.

Bronn and Tyrion think the solution for the angry teenage boy is obviously to get him a prostitute or two. Tyrion thinks he is being helpful by sending Ros – side note: what are they doing with Ros? Aren’t there any other prostitutes in King’s Landing? – and a friend to entertain the King but instead Joffrey displays a new level of cruelty. The spoiled brat has Ros beat her companion. Severely. While he keeps a crossbow trained on her.

Um, HBO? I already hate Joffrey; everybody hates Joffrey. He’s despicable. I felt like the whole scene was gratuitous and included to meet some mysterious “let’s be outrageous” quota. I wasn’t offended by it, I just don’t think it offered us new insight into Joffrey’s character. I guess it could be Joffrey showing that he can play the game and that he doesn’t need his uncle (he told the girls to go see Tyrion after) but those messages got lost in the sheer meanness of it.

Tyrion might have failed in helping his nephew, but he did succeed in gaining another spy. He learns that his cousin Lancel is Cersei’s new pet. And by new pet, I mean lover. I liked seeing Lancel change from being self important and proud to a sniveling pile with a high-pitched voice when Tyrion threatened to tell the King and Tywin about his incest. By being clever (as usual), Tyrion won himself a spy who knows every move Cersei makes.

Speaking of Tywin, he makes a grand entrance to Harrenhal just in time to save Gendry’s life (rats were going to eat his stomach!). Practical as ever, Tywin wants the prisoners to be put to work. When a part bewildered, part stubborn Arya doesn’t kneel in his presence, she’s noticed and Tywin calls her out as a girl. Oops. Then he recruits her as his cupbearer. Double oops. And as I thought she would, Arya adopts Yoren’s nightly death prayer. I like seeing her become fiercer, but I worry about the life she is being forced into. The effect of feeling helpless for so long has to be hell on your psyche.

Daenerys is fortunately in a position to forge her path rather than being trapped on it. Sort of. One of her riders brings news of a city ahead: Qarth. It is the greatest city that ever was or will be. She’s greeted by the Thirteen (the ruling council of sorts) outside the gates, but they want to see the dragons before they let her in. She calls them rude. I like Dany quite a bit, but she doesn’t always know the difference yet between being polite and being impudent. She yells at them and threatens to burn their city to the ground when her dragons all full grown. I would have applied some tact. She manages to make an impression on one of the Thirteen, Xaro. He invokes a rite that means he vouches for her and her people, and they are permitted into the grand city (and it does look impressive, I can’t wait to see more of it). 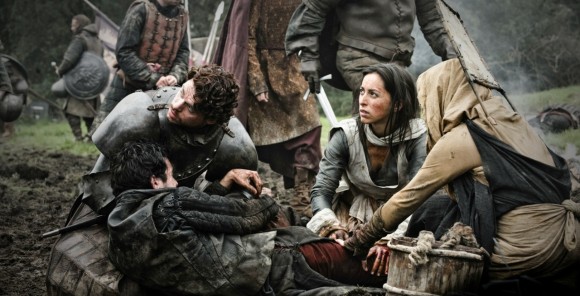 Over at Storm’s End, Littlefinger shows up and starts weaving his webs. He also delivers Ned’s remains to Catelyn, and the idiot thinks Lady Stark will forgive him for betraying her husband. I have no idea how he thought he could spin his actions to make Catelyn sympathetic to him. She orders him out of her tent, but he doesn’t leave without feeding her a lie about both the Stark girls being alive and well in King’s Landing. He offers the girls for Jaime Lannister. The best part about this scene was Catelyn (played by Michelle Fairley). She had to run through so many intense emotions, and she delivered. Wow.

Littlefinger isn’t the only newcomer to camp. Stannis arrives to Storm’s End and offers terms to Renly. The younger brother teases Stannis in such a way that I couldn’t help but wonder if Renly bullied him in their youth. Still, Stannis doesn’t back down from his brother’s taunts. I saw more confidence and verve in his character this week, like he actually has a personality. Maybe some of it is Melisandre, and some of it is the actor finding his beat. He gives Renly until dawn to renounce his claim to the Iron Throne.

A funny thing happens in the night. Yes, I’m finally getting to the elephant in Westeros: holy moley, shadow baby! Just like the scene with Robin Arryn being breastfed by Lysa, I knew it was coming but I didn’t want to visualize it. Melisandre’s labor and subsequent birth was disturbing, creepy, scary, and wrong on so many levels. Like Davos, I almost couldn’t watch. The fact that it followed her saying she’s a champion of light and life just shows how delusional she is about the Lord of Light. Also, it shows her craziness.

And poor Davos. He follows Stannis because he gave Davos a chance when he could have killed him. Because of Stannis, Davos and his family have a better life. He would do anything for him, and Stannis forcing him to be part of this deed is like when a friend you’ve promised to do anything for asks you to help him or her move. You’re not thrilled, but you feel obligated. A shadow baby is a million times worse than moving furniture. I think witnessing this horror is going to screw with Davos’ head. At least, I hope it does. I’d think less of him if he just shook it off as part of his duty.

Once I got past the shadow birth, I appreciated that Carice van Houten is breaking out this season. She is wicked, sexy, and so calm and devout – she is the perfect Melisandre. Even though the character makes my skin crawl, I look forward to her performance every week.

If HBO continues to follow the switching pattern, I’m guessing we’ll get back to Jon and Bran next week. While I’m happy that Tyrion consistently shows up because Peter Dinklage is phenomenal, I’d also like a break from Joffrey’s punch-worthy face.

Even my sieve-like memory noticed the modifications in this week’s episode. Let’s go down the list: