Game Of Thrones Recap: What Is Dead May Never Die | The Mary Sue

Game Of Thrones Recap: What Is Dead May Never Die 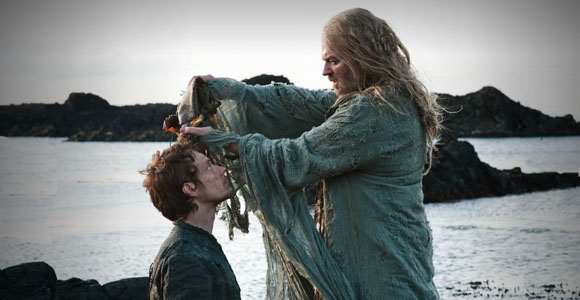 Editors Note: We welcome a new contributor this week to The Mary Sue, Amy Ratcliffe (you may know her as @Amy_Geek online)! Hit the jump for her recap/review of the third episode of HBO’s Game of Thrones Season 2 as well as some thoughts about how the episode strayed (or didn’t stray) from the George R.R. Martin novels.

Season 2: Episode Three – What Is Dead May Never Die

I think the tagline for Game of Thrones should be “the fastest hour on television.” What Is Dead May Never Die took us all over Westeros, introduced new characters, and spun some powerful moments. And as usual, it left me staring at the screen saying, “But it can’t be over yet!”

The episode focused in on Tyrion and the games he has to play to survive in King’s Landing. The likes of Varys and Littlefinger know he can sing the songs, but last night the Imp proved himself to be a formidable opponent. In a genius move, he feeds information to the three people he suspects of being his sister’s faithful pets: Littlefinger, Varys, and Pycelle. He tells each of them that he plans to marry off Myrcella in order to forge alliances but names a different suitor to each person. Yes, it is exceedingly clever, as is the way it was shot. The scene was continuous and cut from one pawn to the next.

Surprisingly, the informer turns out to be Grand Maester Pycelle. He pleas innocence and says he has only served the Lannisters, but he should know better than to think that would impress Tyrion. Though he doesn’t like to show the card, I see a lot of honor in Tyrion. It’s not the same as Ned Stark’s blind, “I will do whatever is right even though it’s often stupid honor.” The Imp follows a different code. I truly believe he puts the good of the kingdom before his family.

He’s trying to do all he can to keep himself safe, as well as Shae. She’s tired of being hidden away so Tyrion poses her as poor, broken Sansa’s handmaiden. He cautions Shae that “we’ve come to a dangerous place.” We heard that exact sentiment from a different Hand last season. Let’s hope it ends better for Shae than it has for either of the Stark girls even if she is too petulant and annoying.

I’d be remiss not to mention the riddle Varys offers to Tyrion about power. He cautions, “Power resides where men believe it resides… And a small man can cast a very large shadow.” He seems to be very much on Tyrion’s side, but it’s the Spider. It would be foolish to believe he serves any one person. I like not knowing his motivation. And truly, as long as he keeps getting more screen time, I’m okay with the mysteriousness. The eunuch’s scenes always make me smile because Conleth Hill is spectacular in this role.

Over in the Iron Islands, Theon is more angst-ridden than Harry Potter in book five. I can’t stand the character, but Alfie Allen plays him to a tee. His family is still treating him like an outsider, and all Theon wants to do is cry about it (though I entirely agree with him giving his sister a hard time about not speaking up when he was feeling her up – ewww). He confronts his dad about giving him up to the Starks like he was nothing, but Balon Greyjoy is not a “let’s talk it out and hug” sort of guy. He wants to invade the North, and he needs his son to pick his blood or the wolves.

I hate saying this, but to his credit, Theon actually appears conflicted. He writes a warning letter to Robb, but he burns it in a dramatic, beautiful scene. With that small action, I think he effectively turns his back on the Starks and the North. He gives himself to the Drowned Gods, and he also gets a ship named Sea B*#ch. Totally not worth becoming a traitor if you ask me.

Speaking of the Starks, Catelyn arrives to Renly’s camp just in time to see a giant of a lady take down Sir Loras. Brienne of Tarth (Gwendoline Christie) asks to join Renly’s Kingsguard, and she is everything I hoped she’d be. Tall, plain, and fiercely protective of her king. That king is painfully charming; it’s easy to see why Renly has 100,000 men behind him. Well, the Tyrell family’s coin is helping with that army. He has recently wed Loras’ sister Margaery (Natalie Dormer). 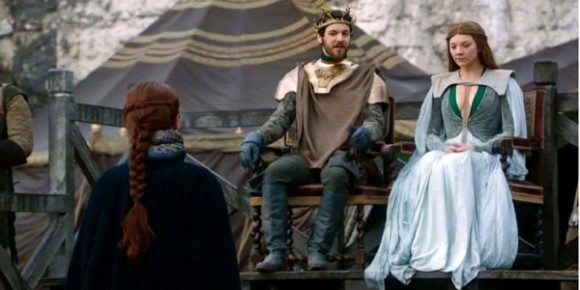 Margaery reminds me of Padmé Amidala in attitude and wacky clothing choices. She is regal, and it’s clear to see that the Tyrells, unlike the Starks, know how politics work. Margaery isn’t much older than Sansa, but she doesn’t have delusions about true love. She knows her new husband actually loves her brother, and she’s okay doing whatever it takes to make Renly comfortable enough to uh… impregnate her. Even if Loras has to help.

Meanwhile, on the road to the wall, Arya and Yoren have a heart to heart. They share a short and quiet conversation, but these sort of scenes are what makes Game of Thrones for me. A troubled Arya wants to know how Yoren sleeps at night given that he’s seen horrible things. Their talk ends when trouble arrives in the form of Lannister men looking for Gendry. Yoren is not the sort to go down without a fight, and he dies protecting Arya. He tells her to run, just like Syrio. That’s one more death to keep Arya awake at night.

Jon and Bran made brief appearances too, but their scenes seemed a bit squished. Jon was the cliffhanger last week; I get the need to circle back around to him. He learns that Mormont knows about Craster’s sacrifices to the Others and treats it as a “it’s the way it has to be” sort of situation. That probably shakes up Jon’s image of Mormont as an honorable leader. Bran, meanwhile, talks about his recurring dreams where he is a wolf rather than a boy to a skeptical but reassuring Maester Luwin. However, the Maester doesn’t realize that the things he’s claimed were legend before (the Others, dragons) are now walking and flying. Huh.

No Daenerys, Robb, or Stannis in this episode. I’m glad they didn’t insert quick scenes with them just for the sake of squeezing them in. More than ever, I’m beginning to wonder how this very large story is going to fit within ten episodes. They’re pouring a lot of information into each one, and it’s a delicate sidestep away from being a meaningless deluge. We’ll see what happens.

A note on the books:

I’m racking my memory for major deviations from A Clash of Kings, and I can’t think of any. Sure, Shae doesn’t end up as Sansa’s handmaiden in the book but to me, that’s minor. Margaery is more scheming and queenly, but I think it works. I don’t know how I feel about Yoren telling Arya a story that sets him up as the reason for her death prayer. On one hand, it’s a neat way to tie it to a character we like but it’s not necessary and smells of cheese. Just a tiny bit.

I do have one important nitpick: I missed Hot Pie’s battle cry!