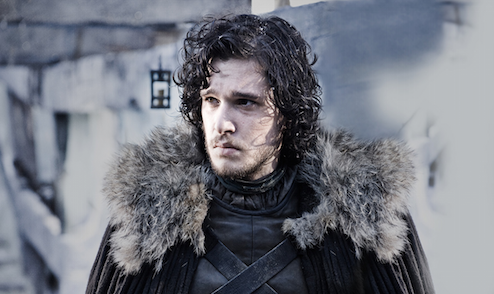 What with the commoner marrying a prince and becoming a princess and the villain getting killed this past week, you may have felt that real life provided all the dose of fantasy that you needed. But, you guys, winter is coming and Game of Thrones is pretty intent on it arriving. Someone had better tell Jon Snow, because he looks  wholly unprepared to deal with the buckets of white powder the crew is dumping on him all episode. Onward!

Jamie Lannister is looking fabulous as he greets a harried Ned Stark, finally arriving in King’s Landing. He turns his nose up at Ned, probably literally at this point, and asks if he wouldn’t rather change before meeting the rest of the shadowy figures of the king’s court. Ned rubs himself in some more dirt, eats some meat, and stabs a few underlings while never breaking eye contact with Jamie,  just to fully display his disgust for smelling nice.

Then we get a little background, although with all the grunting it’s a little hard to decipher: turns out the last king, Aerys Targaryen (progenitor of Daenerys and Viserys) went bonkers and started roasting people, including Ned’s brother. Jamie, who was part of his guard, killed the king by stabbing him in the back. Ned is apparently not overly grateful for his brother’s vengeance, and makes some disparaging comments before storming off. They have this conversation in front of the frightening throne from the promos that is apparently not merely ~symbolic~ as I thought, but a real and torturous looking device the king has to sit on, which spawns a whole host of questions for me, not the least of which is who hired the interior decorator for King’s Landing. Those spikes don’t go with the sunny stained glass at all!

Ned goes and meets the Shadowy Figures. Hey, it’s Mayor Carcetti from The Wire! “Of course, it’s only a matter of time before political pressure in King’s Landing forces him to abandon the principles that got him elected as King Robert Baratheon’s ‘Master of Coin.'” —Videogum. But seriously, folks, it took me so long to recognize him that I ended up having to watch this scene five times. Which is about the national debt. You’re welcome. Ned barges into the meeting like a Congressional freshman and starts trying to reform all the things. The Shadowy Figures are pretty relaxed about it. Apparently they don’t have a Westeros version of National Review breathing down their neck about the debt.

Cersei plays an especially strange game of Risk with Joffrey as she bandages his wittle hand, telling him all his ideas about the military and ruling the kingdom are wrong. But he has the right to rule badly, she says, and to fuck whores, too. Great mom. Really, get that woman a Best Mom in Westeros mug. She ends the scene by telling him anyone who isn’t family is an enemy. I suppose that explains her choice in men pretty plainly.

Arya’s understandably mad at Sansa until Ned explains that Sansa has to take the prince’s side on everything. Arya keeps it real and asks why Ned’s allowing her to marry Joffrey, then. Ned displays his Best Dad in Westeros mug.

Back in Northern Convenient Amnesia, Bran is awake and being Goth-y and depressed about, in short order: stories, winter, his legs never working again. All right, I’ll give him that last one. He tells Robb he’d rather be dead than paralyzed, then writes in his Livejournal about it.

Catelyn arrives in King’s Landing and is immediately shuffled into a brothel to find the waiting Carcetti. He shoos away some walking boobs, and they seem mad that HBO’s breasts quota is being met for such a short period of time this episode. Carcetti is smarmy toward Catelyn, but I literally cannot tell whether or not he’s supposed to be. Aiden Gillen’s flat affect confuses and upsets me, folks. Does he mean to be sinister? Is he supposed to be in love with Catelyn? All is delivered in a metallic and clipped tone.

Carcetti has Ned called for to meet with his wife, but Ned misunderstands when he sees the brothel and chokes the Master of Coin within an inch of his beady-eyed life. Later, Ned and Catelyn have a good laugh about this and then make out. They are not the only couple that gets excited by violence, as this scene directly follows one where Jamie grabs Cersei by the hair and tells her he’d kill everyone for her. She seems into it. Oh, by the way, everyone has figured out the nudnik Lannisters tried to assassinate Bran by now. That’s apparently what happens when you have your hired assassin use a one-of-a-kind blade to do the job.

Interspersed between these scenes is the side story of Tyrion and Jon Snow near the Wall. Jon Snow is showing off his ninja skills to his ruffian friends, and they bully him, so Mommy Tyrion has to come to the rescue. Man, Tyrion has this awesome way of sneering down at everyone, which is difficult from that height. Bravo, sir.

King Robert hates being king, and is angry at everyone. He asks a nearby Lannister to recount old war stories with him, then brings Jamie in so he can mock his “betrayal” of the Mad King Targaryen. (I don’t understand, did they not want the crazy bloodthirsty king dispatched with?) None of this makes him feel better, though, so he orders more wine and sulks in a chair that I will point out is not the spiky throne.

Daenerys is processing with the rest of the horses and horsemen. She shows that she’s assimilating by wearing Xena the Warrior Princess’s hand-me-downs. She needs to pee or something so she makes everybody halt the fuck up. She goes a mere five steps before Viserys hurls himself at her for, I don’t know, daring to command him, being a woman, the usual man-angering provocations.

The Dothraki are predictably not thrilled that someone is threatening their new queen and whup Viserys pretty good, which makes me, Ned, Catelyn, Jamie, and Cersei feel all sexy. YOU’RE IN THE JUNGLE NOW, VISERYS. Daenerys saves him, but not before giving him a look that makes me think no brother of hers is going to be fondling her breasts again. (Jamie and Cersei have now bowed out of the sexy party.) Oh, come on, V. River Tam could tell you pretty well that imbuing the victim with powers is not the victimizer’s best move.

And dynasties all over the damn place could tell that imbuing a new queen with a kid is not the queen’s hopeful king brother’s best move, either. Because Daenerys is pregnant, maybe with some dragon child, unclear, but she is craving some rabbit and feeling good about the whole endeavor. So I’m glad they’re putting the Daenerys/Drago relationship back on its rails and restoring some balance and getting rid of the incessant drum beat behind every Dothraki scene? But I still haven’t seen enough of Dany’s interior thought or development to give this a lot of credit. I understand why she would be more partial to Drago, perhaps because of her sharp increase in power, perhaps because of how he looks shirtless, but I’m not seeing enough from the writing or the actress to justify the swift pace of these developments in their relationship. Just saying.

There’s some lesson-learning about different people offering different life experiences, &c, in the Jon Snow plot, but he’s so pouty that I can’t even with this. Next.

And we go out on Ned’s decision that his youngest daughter should be primed in sword-fighting after all. She Karate Kids it with some hippie mentor, and he acts out a few scenarios where she’d be killed for not being prepared. She’s delighted. Ned, not so much. The music figures this is a good a place as any to end and swells us into the credits. See you next week!