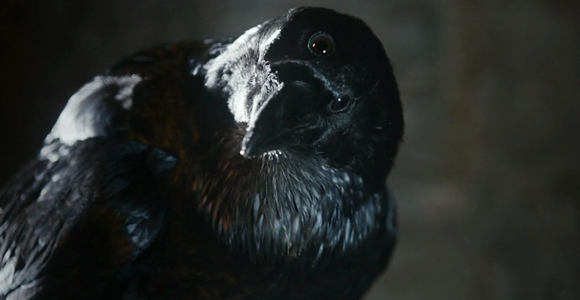 I feel like I can’t really say anything about this casting before the cut but needless to say, HBO’s Game of Thrones are getting closer to the end of George R.R. Martin’s A Song of Ice and Fire novels quicker than I thought they would.

Rodger’s resume lists him as “Three-Eyed Raven.” Now this may make you cock your head like, well, like a Three-Eyed Raven because it’s just a bird, right? Not exactly. The Three-Eyed Raven, referred to as the Three-Eyed Crow in Martin’s novels, appears to Bran in his dreams. We’ve been learning (especially in Season 3) that Bran’s dreams are more than just dreams. Turns out [seriously, turn away now for major spoilers] the crow/raven is a man who’s been appearing to Bran through the bird in his dreams.

Eventually, Bran, Hodor, the Reeds (and someone else yet to be cast) make their way past the Wall and find this man (I won’t describe him anymore here) but that doesn’t happen until the most recent ASoIaF novel, A Dance with Dragons. It’s really the only place left for Bran’s story to go in the HBO series at this point, and we know they’re bringing in other threads from that book, but it still makes me worry about the following season.

[Editor’s Note: Please put “SPOILER” in front of your comments when discussing facts about the upcoming season/books!]