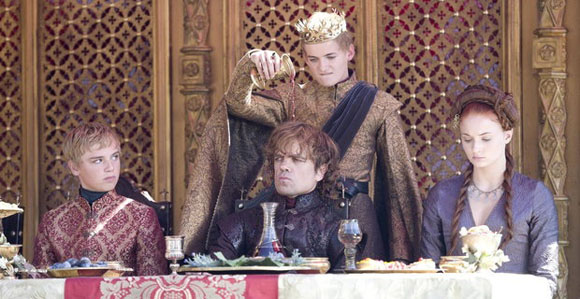 This does not surprise me. Also read on for what A Song of Ice and Fire novelist, George R.R. Martin had to say about recent episode events. Spoilers will be marked as such, you’re good to go until then.

Once again, TorrentFreak has revealed the HBO series has broken a record. Of course, not the best kind you could hope for:

A few hours after the second episode came online the Demonii tracker reported that 193,418 people where sharing one single torrent. 145,594 had a complete copy of the episode and continued to upload, while 47,824 were still downloading the file.

These are unprecedented numbers – never before have 193,418 people shared a single file simultaneously. The previous record was set last year, when the season finale of Game of Thrones had 171,572 people sharing on a single tracker.

Those who hadn’t read the books weren’t expecting anything particularly exciting to happen in the second episode of the season so they were in for a bit of a surprise when a character died. Entertainment Weekly spoke with Martin about what it was like writing the scene originally, back in 1998.

It shows that yes, nobody is safe—sometimes the good guys win, sometimes the bad guys win. Nobody is safe and that we are playing for keeps. I also tried to provide a certain moment of pathos with the death. I mean, Joffrey, as monstrous as he is — and certainly he’s just as monstrous in the books as he is in the TV show, and Jack has brought some incredible acting chops to the role that somehow makes him even more loathsome than he is on the page — but Joffrey in the books is still a 13-year-old kid. And there’s kind of a moment there where he knows that he’s dying and he can’t get a breath and he’s kind of looking at Tyrion and at his mother and at the other people in the hall with just terror and appeal in his eyes—you know, “Help me mommy, I’m dying.” And in that moment, I think even Tyrion sees a 13-year-old boy dying before him. So I didn’t want it to be entirely, “Hey-ho, the witch is dead.” I wanted the impact of the death to still strike home on to perhaps more complex feelings on the part of the audience, not necessarily just cheering.

I’ve had more time to digest the events but believe it or not, while watching it unfold on Sunday night, my significant other wasn’t sure how to feel as the credits hit. Did any of you have that reaction or were you straight-up celebrating?

EW also asked the author if the HBO crew did the Red Wedding justice last season. “Yeah, they pulled it off correctly; it was an amazing moment in television,” said Martin. “They turned it up to eleven, as Spinal Tap would say, by picking perhaps the most brutal scene I ever wrote by making it more brutal by adding in Robb’s wife and unborn child.”