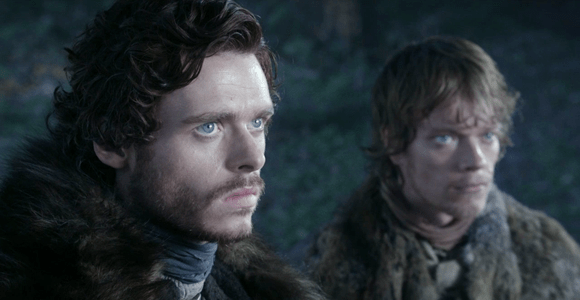 Editor’s Note: Journalist Maria Murriel had the opportunity to attend a press junket with a few of the cast members of HBO’s Game of Thrones recently. Today she shares with us part of her intreviews with Richard Madden (Robb Stark) and Alfie Allen, including why Allen would have loved to play the role of Arya Stark and how Madden sometimes forgets she’s not his real sister.

I couldn’t believe the text my editor sent me:

“Ack, last-minute question! Are you available to attend a roundtable with the Game of Thrones folks tomorrow?”

And so I covered the event for the Miami New Times, and found that Allen would have loved to play Arya Stark.

“It’s so boring, though,” he whined, “because everyone really likes her. I love Arya, but [she’s] everyone’s choice. I love Arya’s character.”

He also said he would have liked to play Melisandre of Asshai or Tyrion Lannister. But he’s happy to play such a “complex character” as Theon Greyjoy, and he’s having fun with it.

One reporter asked him how uncomfortable it was to film scenes like “The Night Lands”’ boat scene, to which he replied as though the question were ridiculous and inconceivable. He did not, in fact, find such scenes uncomfortable.

“I love it!” he laughed, “Definitely not [uncomfortable], man, it’s great! If you’re going to do these things, you’ve got to enjoy ‘em.”

To be fair, he did say he thought his cohort in the scene in question was “brilliant.”

As someone who’s far better enjoyed characters like Jon Snow, I must say I was utterly surprised and charmed with Allen. He isn’t a just a jerk who likes his character for the dick moves and sex scenes — though he does enjoy bringing Theon’s devilish antics to life. He’s an actor who’s more than willing to play a woman, seeing the on-screen cross-dressing as a rite of passage; and a friend who’s happy to direct music videos free of charge (it’s what he said he’s been doing when he has free time).

He admits his character on the show is no hero, but he said, “I don’t think you can’t trust Theon Greyjoy, I just think everyone’s really mean to him.”

The true hero is Madden’s Robb Stark. We talked to him about Robb being a “goody two-shoes” up until this point in the show, and whether he thinks Theon’s betrayal should elicit rage from the King in the North.

“I think he sticks to [his character more than ever],” he said, “because he likes to treat people how he likes to be treated.”

This tenet of Robb Stark’s character is actually one Madden tries to practice. Though he’s not religious, he said he reads a little philosophy.

“I don’t do to other people what you wouldn’t like done to yourself,” he said, “and that way, hopefully, never a bad thing is going to happen to you.”

At times during the interview, he delivered his answers slowly and quietly – like when he told us about his acting methods and how he handles his character:

“I try to play the part as honestly as I can,” he said. “I’ve been living with Robb Stark for almost four years now. In my brain, Arya is my sister; Bran is my brother. So, I can react to them in a very honest way, it just gets complicated sometimes because the lines get blurred.”

To take his mind out of Westeros, Madden said he calls his parents. Sort of like what Robb would do, eh?

Maria Murriel is a culture writer from Miami whose work appears in the Miami New Times’ Cultist blog, Consequence of Sound, and Beached Miami. She’s into medieval fiction and cats, and her next gig will be as a digital reporter at the Sun Sentinel.