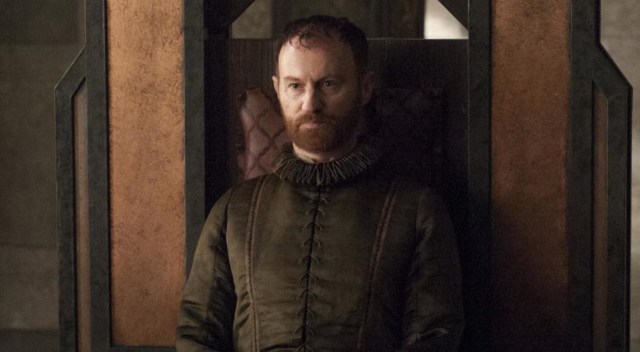 Mark Gatiss didn’t get too much screen time as the Iron Bank of Braavos’ Tycho Nestoris but good news! He’ll be back for Season 5 of Game of Thrones. Read on for another bit of casting, plus an update on that issue a church in Croatia took with nudity in recent filming.

The new casting comes from WinterIsComing.net, who say actor Michael Condron is taking up the role of Bowen Marsh for Season 5. They also mention he’ll be in at least three episodes. Bowen Marsh has so far been in all of the A Song of Ice and Fire books but has yet to appear on the HBO show. His character is one of the Night’s Watch and that’s all I’ll say, considering we don’t know where they’ll be picking up his story.

“At the time, it wasn’t clear if the guest appearance was a one-time thing, and producers haven’t previously said whether he’ll be back one way or another,” Entertainment Weekly says of Gatiss, above, but the “actor is expected back on the Thrones set in Croatia next week.” I, for one, am looking forward to seeing more Braavos this season.

Speaking of Croatia, you may remember us reporting on the spoiler-filled details of a scene running into some snags. No spoilers here (you can read the full story here) but EW gives an update:

Earlier this week there were reports claiming that a key outdoor scene from George R.R. Martin’s A Dance with Dragons focusing on Lena Headey as Cersei Lannister was held up due to a conflict with a Dubrovnik church. (I don’t recommend searching for this spoiler-filled news unless you have read the book.) At the HBO Emmy party Monday night, producers told me that the snag was “old news” and that a new location for the sequence (which isn’t shooting for at least another month) has long been secured.

Since this is a spoiler-free post, please put the word SPOILER, in all caps in front of any comments made in that direction.