Neil Gaiman Has Some Thoughts On Strong Female Characters 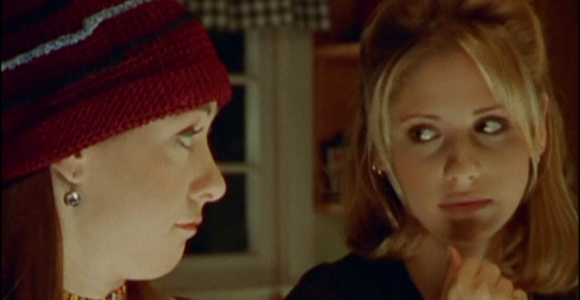 BBC Radio recently did a special on Buffy the Vampire Slayer for the 10th anniversary of the Joss Whedon series airing in Britain. Naomi Alderman spoke with several people including Whedon and Neil Gaiman about the long-running series and discussed the…dun, dun DUN…strong female character.

Alderman asked Gaiman, who famously gave form to Doctor Who’s TARDIS, “How would one go about writing a daughter of Buffy?”

Gaiman: I always feel like the wrong person to be asked when I get asked that question because people say, ‘Well how do you write such good female characters?’ And I go, ‘Well I write people.’ Approximately half of the people I know are female and they’re cool, and they’re interesting, and so, why wouldn’t I? In the case of making the TARDIS a person, you make her the kind of person you’d like to meet.”

Alderman: This gives me nothing to help people with who cannot write good female characters, and they do exist.

Gaiman: I think the big thing to point out to people is, you know, possibly they should go and hang around with some women. And also, it’s worth pointing out that people, unfortunately, misunderstand the phrase ‘strong women.’ The glory of Buffy is it was filled with strong women. Only one of those strong women had supernatural strength and an awful lot of sharpened stakes. And people sort of go ‘Well yes, of course Buffy was a strong woman. She could kick her way through a door.’ And you go ‘No, well that’s not actually what makes her a strong woman! You’re missing the point.'”

Others have tried to drive this point home in the past – Thor’s Natalie Portman, Iron Man’s Rebecca Hall, and cartoonist Kate Beaton – to name a few. Strong female characters don’t necessarily have to have Hulk strength, they need to be strongly written. The difference is something Whedon has noted over the last few years as characters meant to be “strong” like Buffy, weren’t necessarily so.

“I think that the romance, and the supernatural and the lure of the vampire, which is, you know, timeless, that all seemed to go over pretty well. The self-actualized female who was in charge of things didn’t land quite as solidly. I think people are un-used to it. I grew up with it, it just makes sense to me. You know, we write the things we either want to see or always have. Buffy was both,” he told Alderman. “And I, too, have been somewhat disappointed. I mean, there’ve been great shows, great roles, but when you look at the shows somebody would lump in with Buffy the Vampire Slayer they’re, you know, very passive girls choosing between the cute boys. It feels almost like a backlash – we want to inoculate ourselves against this by giving you everything it had without the feminism. And, needless to say, slightly problematic for me.”