Back Alley Internet is a recurring column in which we explore some of the weirder corners of the Internet and see what we can dredge up for your amusement and education. This week: Eric explores an especially perplexing Internet artifact that trades in a bewildering amount of bizarre non-knowledge. It’s a trip.

Every so often, you find something on the Internet that feels like it’s from a different era, sometimes a different world, or even a different universe. We’re not talking net.art here. We’re not talking about a self-aware exploration or weirdness. Sometimes, you’ll stumble upon an artifact so earnest in its utterly dated absurdity that you’ll find yourself struggling to fathom a world in which it can exist. fUSION Anomaly is one such discovery, and trust me, it’s going to mess with your head.

It’s hard to know where to start, but let me suggest that you dive into the Anomaly head first and get a feel for what the water is like before you poke your head above the surface, gasping for air and explanations. Maybe you’d like to start where I initially stumbled upon the beast, and learn a little bit about elevators. There, you see? I mean what is that? Let’s start with the few externally verifiable facts we can dig up.

Really though, before you go any further, you have to poke around in the site a little, just a page or two. I promise it’s worth it.

The Fusion Anomaly* domain was first registered way back in 1999, and doesn’t expire until 2015. The registrant is unhelpfully listed as “Domain Discreet Privacy Service,” apparently located in Jacksonville, Florida. The contact information consists of little more than an address (attn: FusionAnomaly) and an email that consists primarily of numbers. Not much help. If you go to the site’s most logical landing page, FusionAnomaly.net, you’ll find yourself greeted with a Java animation — one that may very well fail to load — and nothing else. A quick view of the page’s source code shows that the page does not actually link to anywhere inside the site. Behind this front door is a brick wall.

The one lead that we could potentially chase down is the artist behind the inexplicable graphic, one Fabio Cucci. Turns out, Fabio is the founding member of AnfyTeam, and according to a decade-old article on Developer, an “Extreme Java Artist.” A cursory Google search turns up a number of connections between Fabio and AnfyTeam, as well as some social media accounts. Unfortunately the picture of Fabio from the Developer article is broken, so it’s hard to confirm (or rule out) that social media Fabio is Extreme Java Artist Fabio.

In any event, nothing aside from the graphic’s attribution attaches Fabio to the site. In fact, the presence of the attribution sort of suggests he’s unaffiliated. Also, a Fusion Anomaly search of Fabio Cucci turns up no results but considering the apparent attempts at secrecy involved in the domain’s registration, that probably doesn’t mean much. But perhaps I’m headed down the wrong road. After all, Fusion Anomaly’s greatest triumph is its staggering breadth of original content and “research” that remains oddly disconnected from the world at large. 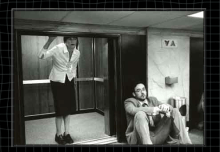 So what is Fusion Anomaly? The way I’d describe it is a proto-Wikipedian** data index, with a side of paranoia, pseudo-science, and a notable lack of accountability. My overall understanding of the site stemmed from stumbling into it from an odd angle — I don’t remember how I wound up on its “elevator” page — and trying in vain to reach some sort of central index.

Now there are a few central characteristics of Fusion Anomaly that you doubtlessly discovered in your initial romp; these are worth focusing on. To begin with, its visual style seems impossibly dated. At first glance, one feels as if one has tumbled into the past, and wound up on an errant Geocities homepage, curated by a 13-year-old who mistakenly believes that the color green is synonymous with hacking prowess.

The second thing that you are sure to notice is that the site’s text is frenetic and often unintelligible, riddled with links, and is — for lack of a better term — “conspiracy-y.”

Now once you click on a few of the links, you’ll discover that Fusion Anomaly is maddeningly literal. Pages seem to be organized into, and also called, “nOdes.” As such, you’d imagine that clicking the hyperlinked text “nOde” would take you to some sort of index. Not so, it takes you to a page that describes the literal definition of a node. Likewise, if you stumble upon the hyperlinked term “atomjack” which appears to be a username from its context, you’ll find yourself on a page giving the literal definitions of both “atom” and “jack.” Super helpful, right?

If you fumble around the pages for intensity and dissolving boundries and intentions you might finally find your way to what seems to be the site’s actual homepage: the nOdebase. Like the rest of the site, most of the links here are garbage and just lead to more insane ramblings but you will find a few valuable tools: An email address (more on that later) and a site-wide search.

At this point, it becomes trival to navigate the site on its own terms, but you already know most of what it contains: indecipherable babblings. If we want to know what this site is, we’ll have to approach it from outside its own vast fiction. There are, essentially, two points of entry. These are Anomalogs 1 and 2. 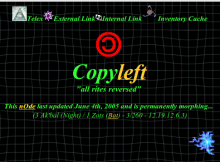 If you visit the “original” Anomalog, you’ll notice some distinct differences from the rest of the site; there are references to users, forums, polls, even an FAQ and a Wiki. Jackpot, right? Wrong. The links to both the FAQ and the Wiki are dead, all of the user-related links are self-referential, and attempting to register as a user will fail. To top it off, if you try to look at an older version of the page, you’ll find crawling has been disallowed. Dead end.

The link to Anomalog2, however, redirects to a real and active WordPress blog which trades in strange pictures and gifs. Besides suggesting that some part of Fusion Anomaly is still alive, somehow, Anomalog2 doesn’t provide much useful information. The blog posts are all devoid of username, and provide no context to what the hell it is we’ve been wading through.

So what is this thing? I desperately wish I had an answer to give you, but so far, I’ve yet to find a surface at which this curiosity sidles up against the real world. Of course there are some more leads to chase down. In this odd little travelogue, I’ve presented you with what I could dig up from Fusion Anomaly in its current form. There are some email addresses and some contact information that could lead to some sort of explanation but until now, I’ve been hesitant to use any of it. If you’re anything like I am, you’ll notice that Fusion Anomaly’s existence feels slighly tenuous. You might feel as though you were not supposed to find it, or that you are not supposed to know what it is. I wanted to take the opportunity to try and observe this beast in its natural state before poking it with sticks. 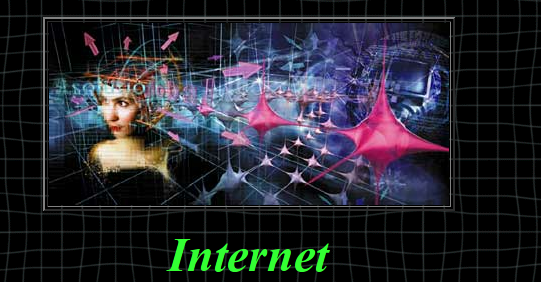 I’d be lying if I said I was hopeful; I don’t think anything is going to happen. It seems very unlikely that anyone will ever get back to me with comments or explanations, or that the site will spontaneously self-destruct the second I email “atomjack.” Either way, Fusion Anomaly is a fascinating little curiosity, even in a vacuum. The Internet is super weird, guys. Isn’t that awesome?

A few snapshots from inside the labyrinth

*I refuse to stylize it as fUSION Anomaly more than once, because that’s really annoying.

**It’s worth noting that — if Fusion Anomaly’s dates are correct, it did actually co-exist with Wikipedia for several years in the early 2000s.