.beat: Swatch’s Insane Attempt To Reinvent Time for the Internet 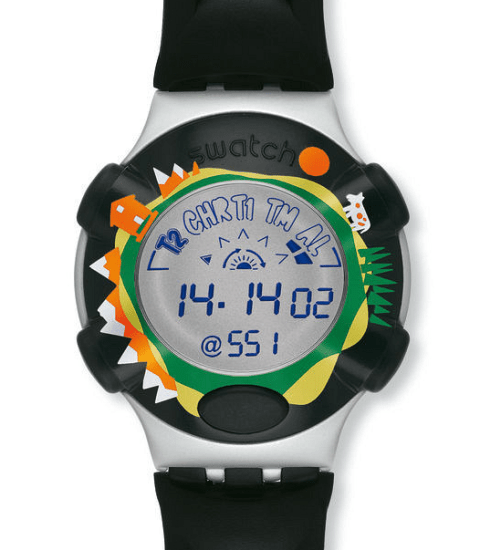 Back Alley Internet is a recurring column in which we explore some of the weirder corners of the Internet and see what we can drudge up for your amusement and education. This week: Eric travels back to 1999 to explore Swatch’s attempt to restructure time itself with its insane “Swatch .beat” time.

It’s 1999. Popular search engines include Yahoo! Lycos, and AOL. Cable and DSL are peeking their heads out into a world of dial-up. Netscape Navigator is on the decline, and Internet Explorer 5 is the new hotness. People are using terms like “World Wide Web” and “Information Superhighway.” And meanwhile, in the background, Swatch is undergoing a wildly hubristic attempt to reinvent the very nature of time to reflect a new, interconnected world; everyone will soon be telling time with “.beats.” What? You don’t remember that part? Allow me to refresh your memory.

In late 1998 at an event called “Junior Summit,” President and CEO of the Swatch Group, G.N. Hayek, and President of Swatch Ltd. made an announment they surely thought had the potential to change the everyday life of millions. Or at least make them scads of cash. They announced Swatch .beat time, a unit of time measurement that eschewed the idiosyncratic practice of dividing time into 24-hour days and 60-minute hours. Swatch .beat time — or Internet Time as it came to be called by many — would be the same for everyone across the globe, and Swatch would make watches that displayed the time in .beats. Swatch Internet Time even became the official time metric for Nation.1, the online country created and run by children. What? You don’t remember that either? Maybe that’s a story for another time.

But I’m getting ahead of myself here. What on Earth is .beat time anyway? A beautiful failure. .beat time, or Swatch Internet Time, is a take on a not-uncommon idea called decimal time. Like the metric system, which makes things much clearer by dividing units of measurements by powers of ten, decimal time aims to change time units to match. It’s a noble idea that almost always fails. In the case of .beat time, a day is divided into 1,000 units called — can you guess? — .beats. Of course, from those elegant beginnings, things start getting a little more complicated. An hour ends up being 41.666 .beats, a minute is 0.6944, and a second 0.01157.

Like GMT successor UTC, .beat time is the same across the globe; there are no timezones. Instead, everyone operates on BMT, or Biel Mean Time, Biel Switzerland being the location of Swatch Headquarters. For all that fancy naming, however, BMT is effectively just Central European Time, so beats can be traced back to the 24-hour cycle that can be found in all of the modern-day European Union. Unsurprisingly, .beat time does not observe daylight saving time either. It opts for a truly stripped down interpretation of time.

Now, you can probably see the problem that .beat — and all decimal time — runs into. While you can track things like the meter, liter, and gram back to an absolute and unchanging physical fact (one cubic centimeter of water is equal to one mililiter and weighs roughly one gram), the Earth’s orbit is elliptical, meaning years and days are slightly varied, and as such, an attempt to subdivide them permanently and precisely is pretty much doomed. That kind of precision can be great for purely computer applications, but it gets messy when you start trying to get people to use it in their daily lives. In addition to this, .beats had their own specific problems, including the rather arrogant choice not to operate under the established universal time UTC, not providing any other unit of measurement besides the single .beat, and being a highly-branded unit of measurement with no backing from any sort of authority other than Swatch. See for yourself; next time you need want to know what time it is, recruit a friend to look it up and tell you in beats. You’ll immediately see how unintuitive it is.

All that aside, .beat time did manage to become briefly adopted by several groups. A few of .beat time’s biggest wins included convincing CNN.com to use the units, and becoming deeply ingrained in Phantasy Star Online, which was looking for a way to try and unite players from Japan, the United States, and Europe, many of whom who were playing on the same servers. As late as 2001, Ericcson released a phone with the option to display the time in .beats.

What little momentum Swatch was able to muster behind .beat time was very short-lived, however. In 1999, before .beat time’s first birthday, Swatch got caught up in a fiasco concerning their Beatnik satellite. The satellite was part of a marketing push for watches that displayed .beat time and was theoretically supposed to synchronize watches in the .beat line. Swatch’s plan for doing so, however, involved using amateur radio frequencies for commercial use, which is prohibited by international treaties. As a result, Swatch donated its satellite’s transmitter batteries from the Beatnik to the MIR space station, and the whole project wound up dead in the water.

Obviously, no one really uses .beats for much of anything anymore, considering there are plenty of other alternatives like, well, normal time, or Unix Time if you feel like being a little eccentric. That said, .beat time still exists, quietly, in some corners of the Internet. While Swatch isn’t pushing the concept any more, they haven’t disowned it; you can still find a .beat converter on their site, and its design is strikingly modern. Companies like Ericcson may not be around to put out .beat-enabled phones any more, but rest assured, you can find .beat time apps on both iOS and Android.

Our current system might not be a perfect one with its time zones and leap years and leap seconds, but it’s what we’ve all grown up with and we’ve patched it together with enough tape that it works consistently, for the most part. Maybe there is some sort of metricized time in our future, but let’s hope that it’s a little something more than a poorly realized marketing ploy, and also that it has a better name. I mean .beat? Come on, right?