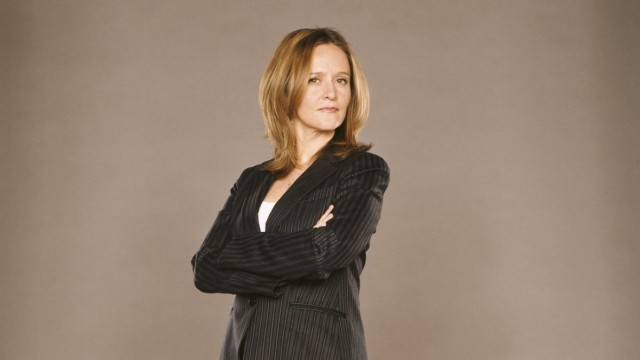 Full Frontal with Samantha Bee hasn’t yet aired its first episode — that’ll be on February 8th — but Bee knows what sort of response to expect. She’s already begun to make her own characteristically dark jokes about it. She’s set up a hotline for rape threats (it’s 1-844-4-TROLLZ), featuring a deadpan automated response: “No one is here to take your call, but your offer of nonconsensual sex is important to us.”

“It’s not a joke for everyone,” Bee clarified to NY Mag. “This is as dark as satire can probably be. It’s also about the condition of being a woman in this business.”

Perhaps the most compelling aspect of Bee’s description of the behind-the-scenes preparations for the show is her description of the writers’ room, which could end up being the most diverse of the entire late night line-up. Bee and her showrunner Jo Miller used a blind submission process to select their writing staff, and they also made sure to cast as wide a net as possible when seeking applicants.

According to NY Mag, the final staff of the writers’ room is “50 percent female and 30 percent nonwhite. It’s a mix of experience levels as well; there is one writer who was previously at Letterman and another whose last job was at the Maryland DMV.”

Bee emphasized that the writers’ room is the aspect of the show about which she feels most proud: “If we don’t do anything else right, we hired incredible people across the board. Our hiring process was great.” She went on,

There’s a lot of people sitting around in rooms discussing how to make it happen as opposed to just, like, doing it. Asking: “Do you have any 45-year-old-woman friends who you think are really talented who could submit an application to us?” “Do you have any black friends who are great writers who haven’t had a shot?”

The show is also developing a mentorship program for new writers. In Bee’s words, the program will look for “pockets of people who don’t formally have access to this world, who want to be in this world, who have no idea how to get there, and who demonstrate some skill in some capacity and a passion for it.” Her best hope for the mentees? “Find a job for that person … then you start actually seeing the ratios change. That’s the goal.”

Sounds like Bee plans to swing for the fences on every level with this show. Are you planning to watch?

(via Jezebel, image via CBC)