What Fruit Flies Eat as Larvae Affects Their Offspring, and That Could Also Be True of Humans

I guess this means I shouldn't have eaten that bowl of sugar that one time in third grade? 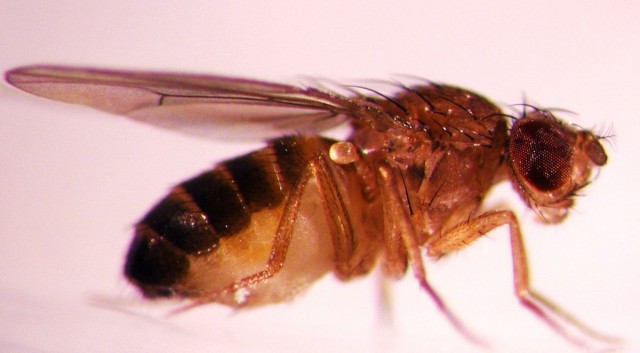 A study done at The University of Alabama in Huntsville has shown that the larval diet of fruit flies has an impact on their offspring long before they’re born or even conceived. Fruit flies are often used in studies as a stand in for humans because we have a similar metabolism, so that could mean what we eat growing up could have an impact on our kids.

The study compared groups of fruit flies that were raised as larvae on either a sugar-rich or protein-rich diet. The diets were controlled by regulating the levels of yeast and sugar in the food given to the flies.

When the flies matured and reproduced, it was seen that females raised on the protein-rich diet were more capable of reproducing. Offspring of the protein-fed flies also had more metabolic reserves than the children of the sugar-fed flies.

We saw that maternal larval diets higher in protein increased the overall fecundity of the adult mother, the number of eggs she produced, and also had a beneficial effect on the next generation, the F1 generation of offspring.

The benefits that the offspring of the protein-fed flies showed didn’t go away after they were switched to a diet of pureed bananas, which according to the study is pretty standard fly food in a lab. This indicates that the larval diet of the flies has a lasting effect into adulthood, and even on their offspring.

It’s generally well accepted that what we eat affects our health, and even that what parents eat affects their children. What’s interesting about this study is the idea that what we ate as children could have an impact on future generations.

(via University of Alabama in Hunstville, image via Oregon State University)