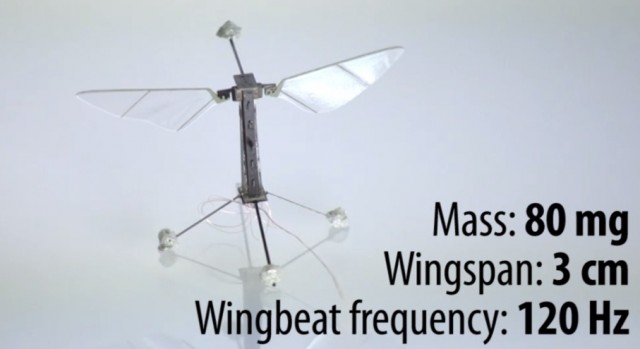 This is RoboBee, and it may be the world’s tiniest robot. Inspired by the anatomy of aviation-inclined insects like bees and flies, it’s just a bit larger than a human fingertip. And after years of work, RoboBee has joined its organic inspirations in flight. The minuscule machine designed by researchers at Harvard took to the air for the first time last year, but the footage of its flight is only available this week, now that the results have been published in the latest issue of the journal Science.

You can take get a load of the bot’s first flight in the video below, where RoboBee demonstrates its skills in hovering, as well as moving laterally, all on wafer-thin wings that move so fast — 120 beats every second — they appear to be completely still. Since conventional electromagnetic motors are too bulky for RoboBee, its wings are powered by tiny piezoelectric motors — strips of ceramic that expand and contract at the whim of an electric current.

The research team has gone through a veritable hive of RoboBees, developing more than 20 prototypes in just the last six months thanks to new developments in fabrication that allow much of the robot’s frame to be built in one stroke and then assembled by being bent out of a frame — much the same way an image pops out in a child’s pop-up book.

While researchers anticipate more advanced versions of RoboBee seeing service in applications from search and rescue to crop pollination and monitoring, the new techniques they’re developing to build the robots could have implications in an even wider array of fields, like creating new classes of tiny, easily assembled medical monitoring devices.