Michigan J. Frog never looked so classy, and he wears a top hat. 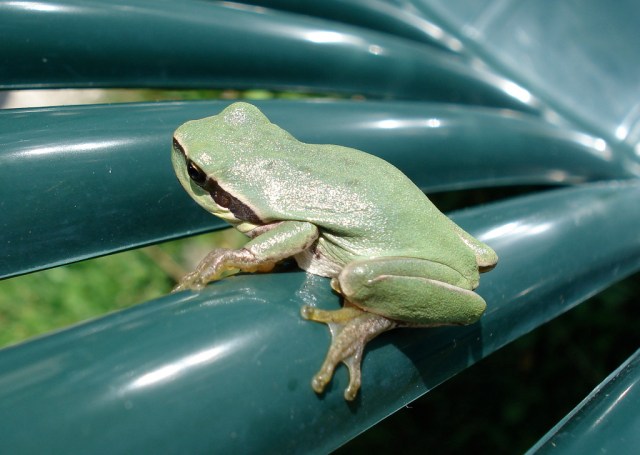 See this picture of a frog? Now think about him wearing tiny pants. This isn’t just an adorable thought exercise we’re doing here, by the way. This was an actual scientific experiment performed in the 1760s to determine the importance of sperm to the frog’s reproduction cycle. We’re doing science. You know, kind of.

While sperm was technically discovered in the 17th century with the invention of the microscope, no one could really figure out what the point of it was for a while. Some speculated that it was a type of parasite, while others thought it might be full of little people who then were implanted into the uterus during sex and turned into fetuses. I hope I don’t have to tell you that both of those ideas are completely false.

In order to test whether or not sperm is necessary in sexual reproduction, Italian clergyman and scientist Lazarro Spallanzani gave some male frogs tiny little pairs of tight, taffeta pants to wear and left some male frogs au naturale as a control. He then let both groups of frogs loose on a bunch of lady frogs to “seek the female with equal eagerness, and perform, as well as they can, the act of generation.”

In addition to making the frogs look incredibly dapper and refined, the pants also prevented them from releasing their sperm into the water around the female frogs’ eggs, keeping them from being fertilized. Ultimately, Spallanzani concluded that there must have been something in the sperm that combined with the egg to create embryos. Also, you probably shouldn’t try to procreate while you’re wearing skinny jeans.

Unfortunately, we do not have any illustrations of what a fog in tiny little pants probably looked like. You know who does? Buzz Hoot Roar, a blog that specializes in ridiculously adorable artistic renderings of scientific stories. If only we had a scientific reason for every article of clothing we ever put on an animal so we could get them to draw each one for us. Puppies in little hats? Obviously we’re performing very elaborate tests on their sense of balance. Kittens in bowties? It’s to examine the effects on… um… okay, I don’t know. I’ll work on that proposal and get back to you guys.