We're certain this proves some very, very important things about evolution and so forth. We're just not at all sure what any of those things are. 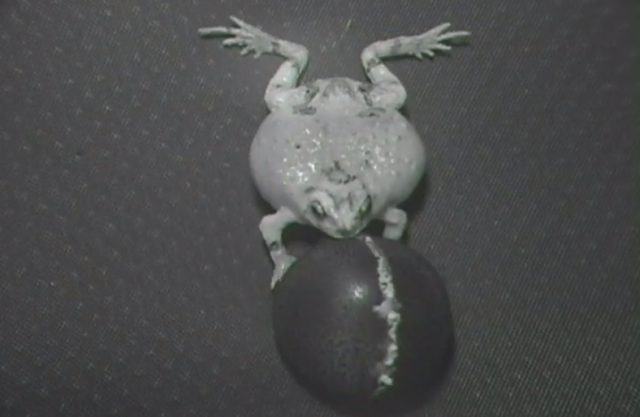 Science is great for a lot of things — curing diseases, discovering new sources of energy, what have you. However, science is also responsible for a lot of accidents that weird us out more than anything else. Case in point: consider the Túngara frog, who can typically be found croaking away in Central America. Scientists from the University of Texas discovered a way to fool the female of the Túngara frog species into responding to bogus mating calls that shouldn’t even be possible, all using a robot impostor frog to do it. What’s next, a cyborg-frog hybrid species? Man was not meant to toy with nature thus!

First, the team attempted to recreate all the different components of the male Túngara frog’s mating call with a replica, which is a pretty good likeness judging from the below video. You know, until the very end. I hope that never happens to actual frogs.

They then studied the way in which male frogs actually seduce their female counterparts, made a handy chart of behavior patterns, and tested that chart out by trying those patterns on the female frogs using their new robot.

The result was that the researchers uncovered some ways of provoking attraction in a female Túngara frog that could never have existed in nature — not to mention a whole load of confused lady frogs:

Poor girl — she’s basically getting catfished. By a frog!

Basically, by combining multiple aspects of the mating call — a “whine,” a “chuck,” and an expansion of the vocal sac — the researchers were somehow were able to trick the frog into thinking that she was actually hearing the correct mating call, which got her all excited for potential frog sex.

Ryan compared the phenomenon to what’s called a “continuity illusion” in humans. If loud enough white noise is played in between a pair of beeps, humans will begin to perceive the beeps as a continuous tone. It’s not fully understood why this happens, but it’s probably a byproduct of our brains’ useful ability to filter out background noise.

Túngara frogs are challenged by an auditory world similar to what confronts humans in noisy environments (what’s called the “cocktail party problem” by cognitive scientists). At breeding choruses there is a lot of noise and cross talk, with sounds and images of several males reaching the female at different times. The females need to extract meaningful information from all of that. Ryan said it’s plausible the neural mechanisms that enable them to correctly parse these stimuli in nature are being hijacked by this artificial scenario.

So what should we take away from this? Well, that certain animals are very good at adapting to new situations to prolong their genetic lines… or they’re just really dumb when it comes to sex. Actually, come to think of it, that may be a lot of animals.

(University of Texas via IEEE Spectrum)