Got a Favorite Cat Video? Vote For It To Win The 2013 Friskies Award

Of course, the winning cats will be way more interested in the box the award comes in. 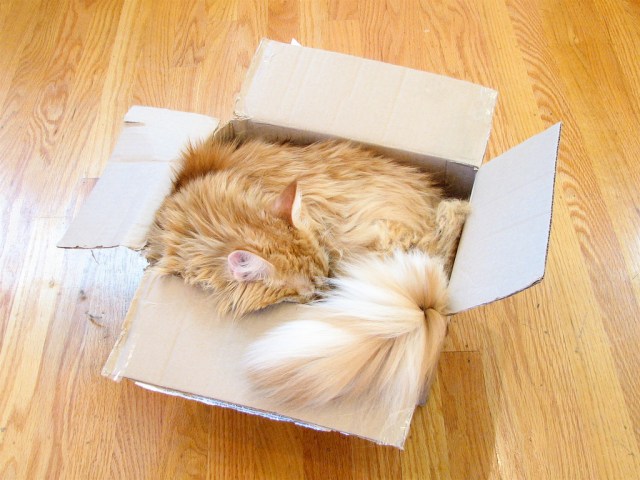 There’s an award ceremony for literally everything these days —  includin gone for the best cat video on the Internet. That’s right, voting for the the 2013 Friskies is currently underway, as sponsored by the cat food company of the same name. It’s not like cats don’t already dominate the internet, the least they should get is some recognition for it.

The winner in each category — Cat Comedy, Catventure, Pursuit of Food, and Rescue Cat — will be chosen by public voting from 20 semi-finalists. These 20 videos were selected by a panel of judges: Will Braden, creator of Henri, le Chat Noir; Mick Szydlowski, who won a Grand Prize last year for “Oskar’s First Toys;” and Abbie Moore, executive director of Adopt-A-Pet.com.  There will also be an Overall Fan Favorite category, for which voters will be able to text their picks once it gets closer to the deadline.

But do cats actually win anything, you ask? Hells yeah, they do. First the 20 semi-finalists will be narrowed down to 12, and these cats (along with their owners, we’re assuming) will travel to New York City for the Award Show on October 15, 2013. Then a grand prize winner for each category, as well as the fan favorite cat, will win $25,000 in cash prizes and a gold-plated “Catuette” trophies.

In addition to the cool prizes, whenever is video is shared or voted for, it boosts the amount of money donated to Friskies’ 20 cat charity partners as part of their “Share to Care” program. So really, everybody wins. Except maybe those weird anti-cat dog-lovers. Whatever, guys — this is what you get for not learning to appreciate all cute animals.

The final award ceremony will be hosted by comedian Michael Ian Black and broadcast live at TheFriskies.com. In other news, I need to start following my family’s cat around with a video camera, because $25,000? Holy cats, Batman. That’ll buy a lot of ‘nip.

(Friskies via The Examiner, image via Windell Oskay)